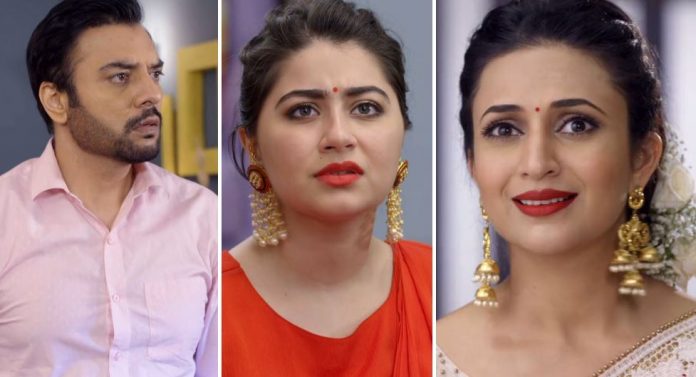 Yeh Hai Mohabatein Raman Ishita momentary sorrow Raman stays angry on Yug. He doesn’t want to meet Yug. Ishita asks him to sort the issues. Raman asks her to go alone and give the Sargi to Aaliya for Karwachauth. She fails to convince him. Ishita meets Yug and Aaliya. Raman’s absence angers Yug. Aaliya understands that Raman is still upset. Ishita lies to them that Raman is sleeping at home and didn’t accompany her. Yug finds Raman there and raises a new issue. He gets upset that Raman is avoiding her. Ishita asks Aaliya to convince Yug. Aaliya wants to talk to Raman once so that she knows the issues clearly. She meets Raman to know how long won’t he forgive Yug.

Raman tells her that he isn’t angry on her. He wants Yug to talk to him and take responsibility of his mistake. Yug meets him to vent anger. He refuses to accept the mistake. He blames Raman for being partial, since he isn’t Adi, Raman’s son. He tells Raman that he is bearing everything when he isn’t at fault. Raman loses his cool. He counts his favors on Yug. He gets deeply hurt by hearing Yug’s words. He ends ties with Yug. Mani and Aaliya fail to bring them together. Ishita wants Raman to forget the bitterness. Raman tells her that Yug is wrong and won’t get any sympathy.

Ishita feels Yug hasn’t done any mistake and this is just someone’s conspiracy against them. Yug tells Mani that he didn’t make any mistake. He gets angered knowing Mani isn’t trusting him. He doesn’t want to stay with Mani as well. Aaliya asks him not to run away from situation always. She asks Yug to face the truth and try to end the problems. Raman tells Ishita that Yug has made big mistake and ruined them completely. Ishita has belief that Yug is innocent. She reminds him about their hidden enemy, who is targeting them in every way possible. Raman finds the possibility.

On the other hand, Natasha barges inside Bhalla house to meet Raman and celebrate Karwachauth with him. Natasha fails to meet him. She pleases Tara and Sunil by giving them Sargi. She wants to take Tara’s help and trick Bhallas. Tara doesn’t know Natasha’s plans and falls in her sugary words. Natasha wants to ruin Ishita’s Karwachauth. Raman is left with no option than to run away from Natasha’s madness.