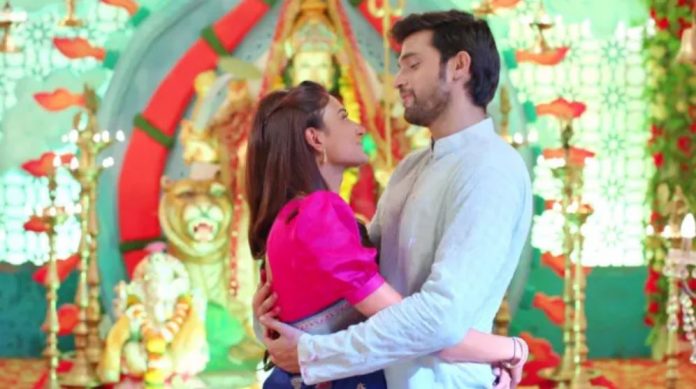 Kasautii StarPlus Anurag Prerna love story restarts Komolika wants Prerna to know her identity when she takes her revenge and kills Prerna. She doesn’t enjoy killing Prerna without revealing her evil intentions. She changes her mind to kill Prerna. She offers lift to Prerna to hurt her heart by insulting her. She drops Prerna and gets angered that she was her house actually. She feels Prerna has got the house in charity. She wants to snatch Prerna’s house back. Komolika indirectly humiliates her. Prerna doesn’t suspect her, since she isn’t aware of her identity. She thanks Komolika/Sonalika for the lift. She meets her family. She breaks down. She reveals her sufferings to them.

She tells them that Anurag has returned, but forgotten her completely. She tells that Basus have thrown her out of the house. Her family gets enraged knowing Mohini’s evil. She tells that she will confront Mohini and not spare her easily. Shivani rushes to meet Mohini. Mohini and Nivedita get glad to know about Sonalika’s family background. Mohini is much impressed with her. She comes face to face with Shivani. She doesn’t care when Shivani confronts her. Shivani gets sharp tongued to answer Mohini. She counts Prerna’s favors and efforts towards Basus. She asks Moloy why did he do injustice with Prerna by ousting her from the house.

Moloy justifies that Anurag’s partial memory is erased and he may slip in coma after a stroke if they remind him anything forcibly. Shivani gets angered that they are selfish and thinking just about Anurag. She asks them to think about Prerna and her coming child. She swears to keep Prerna away. She doesn’t want Prerna to remember them and cry for them. Shivani wants Prerna to move on. Shivani informs Prerna that she has confronted Mohini. Prerna doesn’t want Shivani to create more problems. She tells Shivani that she doesn’t want any more tensions in her life, she is already worried for Anurag. She asks Shivani to leave her alone for some time.

Shivani gets crying for her sister’s pain. Anurag spends time with her parents. Anurag is happy to see their same joy. He asks them to tell him what had happened in the past two years. They decide to not tell them about Komolika. They don’t want to share any disturbing facts with Anurag. Moloy shares some big incidents that had happened. He also shares about his accident, in which he lost Rajesh. Anurag worries and decides to meet Sharma family to pay condolences.

Mohini is worried that Anurag will meet Prerna again. Komolika is happy that Anurag doesn’t remember his love story with Prerna. She isn’t insecure and accompanies him to Sharma family to enjoy their plight. Anurag comes across Prerna. They meet again. Prerna has hope that she will win Anurag’s love once again. Prerna and her family meet Anurag as known people. They don’t remind him their equations. Prerna tells her family that Anurag may not take the reminder positively. They stay worried for his health. Komolika enjoys the time spent with Sharmas, watching them sorrowful and crying. Anurag and Prerna’s love story restarts from point zero.