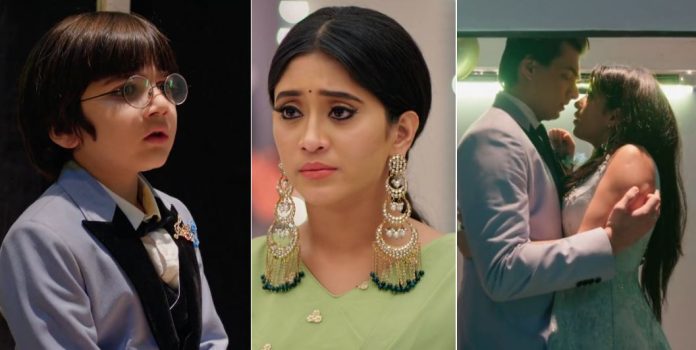 Yeh Rishta StarPlus Romance Kaira Shocking burst Kartik awaits his little son anxiously. He wants to love Kairav and pamper him a lot. When Naira gets Kairav home, Kartik happily dances. Goenkas ask him to control himself, else he will appear kiddish to Kairav. Kartik hugs Kairav with much love. He blesses Kairav to get the world’s happiness. Naira asks Kairav to realize Kartik’s efforts in keeping the puja and throwing the grand party for him. Kartik wishes Kairav. Kairav doesn’t wish him. This troubles Kartik. Naira asks Kairav to wish Kartik. Kairav unwillingly wishes Kartik. Kartik doesn’t understand Kairav’s behavior.

He wants Kairav to hug him. Kairav makes excuses and gets away from him. Kartik wonders what’s happening. The family tells Kairav that they all love him a lot. Kairav gives sweets kisses to the family members, except Kartik. Kartik wanted Kairav to kiss him too. He thinks something is wrong. He wanted to be Kairav’s priority. He feels its unfair that Kartik isn’t talking to him. Kairav gets away with Vansh. He spends time with family. Manish pulls Kartik’s leg by getting Kairav with him. Kartik isn’t jealous of his fortunate dad.

He just wants to be lucky too. Manish is happy to be in demand. Kairav is stubborn. He doesn’t want to celebrate with Kartik. Goenkas take Kairav for the puja. Naira wants to be with Kairav always. Kartik wants his child to be happy. Kairav wants Kartik to become humble and sweet like before. He doesn’t like his angry avatar. He prays that Kartik doesn’t hurt Naira again. He feels odd that Naira is sidelined by Goenkas. He watches Naira getting away on Dadi’s word. He doesn’t want injustice to happen with her. Naira doesn’t mind anything. Kartik gets jealous and jokes on Kairav’s gifts number. Naira wants to gift something special to Kartik.

The family laughs on Kartik’s sweet jealousy. They want Kartik’s happiness. Naira fails to give the gift to Kartik. She receives the bouquet ordered by Vedika. She hands it over to Kartik. He assumes Naira has ordered it. He gets happy. When he reads Vedika’s note, he gets emotional. Naira sheds tears of sorrow over their separation. Kairav finds her crying and watches Kartik. He feels Kartik is hurting her again. He feels sorry for her. He hates Kartik. He lies to Naira that he is feeling unwell. Kartik and Kairav get the limelight. Kairav tries keeping Naira with him. Kartik asks Naira to make Kairav ready. Kartik and Kairav’s twinning comes as a surprise.

Dadi can’t help and praises them a lot. She blesses Kairav. Kartik thanks Naira for the thoughtful twinning clothes. He hugs Kairav. Kairav feels suffocated. He chooses to stay with Naira. Kartik feels something is definitely bothering Kairav. Naira assures that there is no such annoyance. Kartik announces a fun game of Kachori maze. He wants to play the game with Kairav. Kairav finds Naira getting alone again. He wants Naira to play with them. He involves Naira in the game. The elders ask Naira to join the fun.

Kartik, Naira and Kairav search for the Kachori to win the game. Everyone gets willing to play the game. The elders turn kiddish because of Kartik’s creative ideas. Kartik and Naira come close while playing the game. Kairav finds the Kachori, but Naira picks the platter first. Kartik tries to snatch the platter and win the game. They get into a cute banter. Kairav misunderstands Kartik. Kairav feels Kartik is really a bad person. His anger builds up. They have unplanned romance. They dance in the party for Kairav’s sake. They get into a romantic moment and feel the awkwardness. The surprises lined up in the party for Kairav turn into a shocker for poor Kartik.