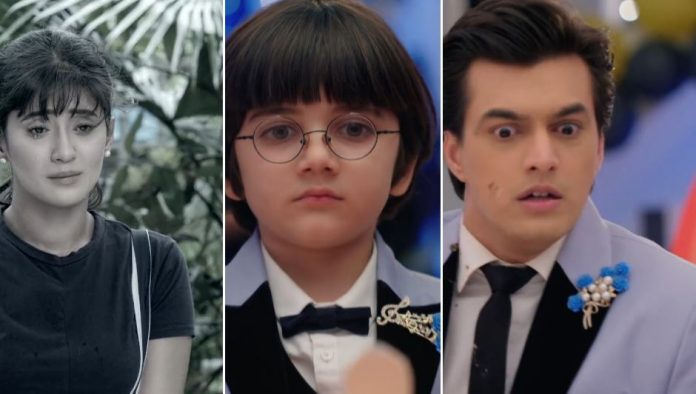 Yeh Rishta Terrific Kairav accident Hatred twist Kartik and Naira have a cute argument over the Kachori platter. He wants to get the platter, since he is the birthday boy. She asks him not to take advantage of his special day. She doesn’t want to give the Kachoris. She wants to win for Kairav’s sake. He tells her that she didn’t get any gift for him. He asks if she doesn’t know the gifting ritual. She gets emotional, but doesn’t melt down. She doesn’t want to share the Kachoris with him. Kartik and Naira get into a romantic moment, which makes them slip into a dream world. They have a romantic dance performance as part of their dream together. Their argument continues.

He wishes that the time stops for them and they stay together. Their fight upsets Kairav again. The maze breaks down. The family bursts into laughter on seeing their kiddishness. Kairav gets an impression that Kartik has snatched the basket from Naira and claimed himself to be the winner. He finds Kartik doing wrong again. He counts Kartik’s mistakes. The guests get to see Kartik and Naira’s unity, understanding and smiling faces. They find them happy as a married couple. They upset Dadi by reminding Kartik and Vedika’s marriage.

They tell that Kartik is living happily with his ex-wife. Dadi and Suwarna get upset. They hadn’t expected such taunts. Pallavi arrives to meet Vedika. She overhears the conversation. She also feels strong bonding between Kartik and Naira. She wants to know where is Vedika. Dadi tells her about Vedika’s visit to her Bua’s place. Kartik organizes a magic show to surprise Kairav. He asks the magician to disappear Naira by the trick. Kairav derives another meaning and thinks Kartik wants revenge. He gets scared that Kartik will separate Naira from him. He asks Naira not to listen to Kartik. He doesn’t want her to go anywhere. He misunderstands Kartik.

Naira tells Kairav that she will never go away from him. She assures him about the safe trick. When magician disappears her, Kairav loses his cool. He cries a lot to get his mum back. Kartik tries hard to console him. Kairav angrily hurts Kartik and jerks him away. Kairav is deeply worried for Naira. He wants to see her. Naira returns to him. She consoles Kairav and explains the magic trick. She tickles him to make him laugh. Kartik feels he has turned Kairav upset. Kairav ignores him. Kartik tells Naira that he has done wrong to spoil Kairav’s mood. Naira tells him that she will help him in convincing Kairav. He asks her to perform with him.

Moreover, Kartik and Naira entertain Kairav as his favorite cartoon characters. The family members dance with Kairav. Kairav is still upset. Kartik happens to get Naira’s gift. He finds a cute photo album. He tells her that her gifts are always the best. He gets emotional. He values Naira a lot. Naira knows that she can not become a part of his life now. Kairav regards Kartik as the villain in Naira’s life. The misunderstandings crop up. Kairav tells Vansh that he doesn’t want to celebrate his birthday and cut the cake with Kartik.

Vansh wants to tell Naira about Kairav’s anger. Kairav gets fed up when Kartik hugs him again and again. He finally bursts the bubble and ruins the birthday cake, to make Kartik away. Kartik’s efforts go in vain and his smile vanishes when Kairav gives him the biggest shock of his life. Kairav shouts on his dad in front of the guests, expressing his hatred for Kartik. Kartik shatters when his son tells how much he hates him. Naira can’t believe Kairav’s hatred for Kartik. Kairav gets inconsolable by both of them. Kairav runs out of Goenka house when Kartik tries to explain him. Kairav wants to get away from him.

The family members follow Kairav to stop him. Kairav reaches the middle of the road and meets with an accident, shockingly. Kartik and Naira witness the worst moment and break down. Goenkas and Singhanias call for the emergency and rush Kairav to the hospital. Kartik and Naira beg Pallavi to treat Kairav and save him. They console each other and stay united as a couple, much to Pallavi’s shock. Pallavi realizes that Vedika will never achieve Kartik’s love.