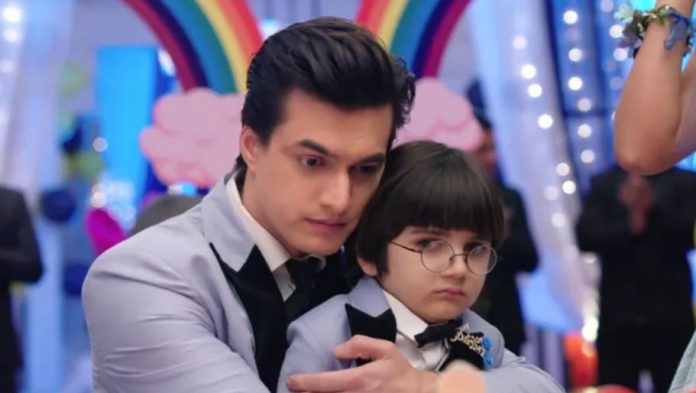 YRKKH Starplus Kahaan Tum Shocking twists Naira gets helpless because of Kairav’s hatred for Kartik. She fails to explain her son that Kartik loves them a lot. Kartik has always been protective about Kairav and her. She wants Kairav to understand that Kartik’s anger was just concealing his love and immense care. Naira breaks down when Kairav asks her to take him to Goa. He wants to go away from Kartik. Singhanias support Naira when she shatters in front of her child’s stubborn demand. Kartik learns Kairav’s decision. He lets Naira take Kairav if this gives happiness to the latter. Kairav makes prayers with Singhania family and bids farewell to them. He tells Naira that he won’t ask for Kartik and won’t miss him. Naira leaves for the airport with a heavy heart. Will Kartik stop them from leaving?

Rohit gets a surprise bachelors party organized by Rohan and Akash. Rohit hides the party secret from Sonakshi. Rohan asks Rohit to celebrate his last day as a bachelor and live his life to the fullest. Rohit goes crazy while Rohan calls the dancer home. Sippy boys have fun dancing in the private party on Rohit’s floor. Rohit doesn’t inform Sonakshi and lies to her when she calls him up. Sonakshi still learns about the party after overhearing other members. She realizes that the boys are up to some mischief. Sonakshi doesn’t get jealous and shows maturity. She lets him enjoy the party and doesn’t add any twist. The twist comes itself when Rohit lands in an odd situation post the bachelors party.

Ronak gets Muskaan’s check up done. Doctor tells him about her weakness. Ronak requests the inspector to permit Muskaan for parole for a week. He gets the permission. He takes Muskaan home. He organizes baby shower ceremony for her. She regrets that they will be parting ways again. Doctor gets sonography reports home. She tells Muskaan that she is carrying twins and its a complicated case. Muskaan gets upset. She hides her sorrow and enjoys the function with the family. Bua and Dolly aren’t happy to see her.

Ronak celebrates happiness with her. Doctor asks Muskaan to tell Ronak about the truth. Muskaan sees him happy. She doesn’t want to spoil his happiness. He secretly takes her for an icecream treat. Inspector suspects him that they are running away. He cancels the parole and arrests Muskaan again. Sir ji asks Surendar to kill Muskaan’s child. Surendar is also revengeful against Muskaan. Muskaan gets attacked in the hospital. The doctor knows the truth about Muskaan’s twins. Surendar takes one of the baby with him. Ronak comes across him. Surendar had already threatened Ronak.

Ronak realizes that Surendar has gone mad in revenge. Muskaan falls in trouble post with delivery. She is taken back to the jail. Muskaan gets tricked by Sir ji. Ronak doesn’t know that Muskaan has given birth to twin daughters. Muskaan is aware of the truth. She thinks she has given birth to one baby girl, since the doctor already told her that one of her child will be at risk. Muskaan and Ronak’s lives changes completely. Muskaan escapes with some prisoners. The police hunts for them. Ronak suspects Surendar to be stealing his child. He follows Surendar and reaches him to get back his child. He succeeds to get his daughter back. Ronak gets a huge shock on knowing Muskaan’s death happening in the accident. He shatters with the truth.