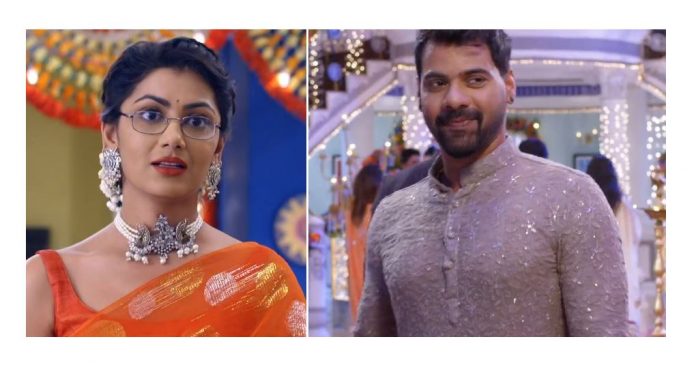 Kumkum Bhagya Shakti Nimki Spoilers Alert Pragya asks Rishi to come with her and help her in some work. He doesn’t want to go to Abhi’s party, knowing Priyanka will be there. She requests him to just drop her. He agrees to her. On the other hand, Vikram tries to initiate a fight between Pallavi and Dida. He has to win the bet and defeat Ranbir. He compliments Pallavi. He fuels the fire by telling her that Dida finds her getting old. Pallavi and Dida get into a fight because of Vikram. Vikram realizes that they are acting and can never fight. Pallavi shows her understanding with Dida. Dida supports Pallavi. They both crack jokes on Vikram, much to Ranbir’s surprise. Ranbir wins the bet.

He asks Vikram to accept his defeat. Ranbir stays cool as ever. He wishes Prachi and Shahana. Prachi argues with him. Ranbir feels guilty and apologizes to Shahana. He tells her that he can help her. His sweet behavior impresses Shahana. They become friends. Prachi asks Ranbir not to make false promises and play with Shahana’s feelings. She asks him not to flirt with Shahana. She warns him. Rhea wants Ranbir to break Prachi’s heart badly.

Aaliya wishes Purab and spends time with him. Abhi alerts Purab of her intentions. Aaliya expresses her love for Purab. Abhi jokes on Aaliya’s spying ways. She gets upset with Abhi. She is scared to lose Purab. She doesn’t want to leave Purab for Disha. Purab falls helpless. Purab doesn’t think he can love Aaliya ever. Abhi knows his emotions, since his love is also for Pragya. He doesn’t want Purab to forget Disha. He rushes to meet Pragya. Aaliya doesn’t want Abhi and Pragya to unite. She doesn’t want Rhea’s happiness to end because of Pragya’s arrival. Meanwhile, Priyanka gets revengeful against Shahana.

She wants to kill Shahana to make her away from Rishi forever. Ranbir gets happy to meet Rhea and get struck by her beauty. She feels lucky that he loves her so much. She asks him if he will stop loving her. He promises to always love her. He praises her unique personality, which is common thing between them. He confesses love to her. She is happy that he will be always of her. Sarita awaits Pragya in the party. Priyanka plans to push down Shahana from the terrace and kill her. She wants to frame Ranbir in the blame.

She wishes that Shahana either loses her face or life. She gets evil thoughts. Rhea gets insecure about Prachi and Ranbir. She tells him that the doubt will ruin their relation. She wants him to end her doubt by finishing the bet soon. She tells her that he will do something to prove his love. She doesn’t want him to commit suicide to prove himself. She still waits to test his love and see what he could do for her. What will Ranbir do to prove his love? Will Abhi and Pragya unite? Keep reading.

Nimki Vidhayak:
Nimki tells her family that she is going to become minister. Her family gets surprised to get the food news. Shukla’s PA calls Mintu to know about Nimki. Mintu tells him that he didn’t speak to Nimki. The man threatens him and asks him to speak to her soon, else his Dadi will be in trouble. Mintu asks him not to cause any harm to his Dadi.

Sufiyana Pyaar Mera:
Rupali breaks Madhav and Saltanat’s friendship by revealing Madhav’s feelings for Saltanat. She wants to take Krish and run away. She is happy that her plan is working. She kidnaps Zaroon to put the blame on Madhav. She wants Saltanat to doubt Madhav. She wants Madhav to hand over Krish’s custody to her.

Shakti:
Heer gets a huge sorrow in the form of Soumya’s death. Soumya loses her life while attempting to save Heer and Preeto. Heer breaks down. She speaks to Soumya’s picture and gets emotional. She asks Soumya why did she go so far from her. Preeto wants Heer to become a strong person, so that no one challenges her identity. She empowers Heer. Preeto takes sole responsibility of Heer.