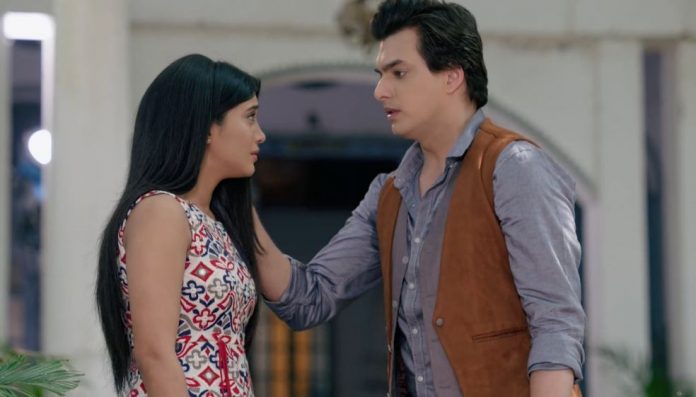 Ye Rishta Starplus Today Naira surprising move Naira gets a sinking heart when she informs Kairav that they are going to leave for Goa. She gets more upset when Kairav doesn’t show any willingness to stay with Singhanias in Udaipur. Kairav wants to go far from Kartik as soon as possible because of his increasing dislike towards the latter. Kartik doesn’t want his son to have a life full of suffering. He decides to let Kairav go free. He loves Kairav more than his life. He is sure that Naira will give much love to Kairav and fill his life with happiness. He doesn’t wish for anything else. He learns about Naira leaving for the airport.

Naira sheds tears while she bids an unwanted farewell to her family. She gets compelled because of Kairav. Kairav also misses Kartik, but his anger ruins his senses. Naira and Kairav think of Kartik, who silently follows them to the airport to see them until the final moment. Kairav has no idea that Kartik is so close. Naira asks Kartik not to follow them. Kartik and Goenkas stay sad after Kairav leaves.

They get a huge surprise when Naira gets Kairav home. Dadi’s request gets answered. She gets thankful to Naira. Kartik thinks he is daydreaming. He soon realizes that its reality. Naira presents a smiley kachori to Kartik. She tells him that Kairav has agreed to stay with him. She asks him to make the most from this only chance to win Kairav’s heart. She tells Kartik that it wasn’t easy to convince Kairav. She tells about Naksh and her smart way to make Kairav realize his mistake of punishing the entire family when he is just upset with Kartik.

She tells that Kairav has decided to come back for the family’s sake. She promises to bring Kartik and Kairav close. Dadi, Manish and Suwarna are sure about this, since Naira had united Kartik and Manish as well. Gayu warns them that they are cheating Kairav. She asks them to realize Kairav’s bigger pain when he learns Kaira’s drama. She asks Goenkas to think about Vedika, if she would be able to understand them. Dadi doesn’t want to think about Vedika as of now.

She just wants to secure Kartik’s happiness, which would happen only if Kairav forgives him. Kairav tells Vansh that Kartik may love everyone, but he always hurts Naira. He doesn’t want Kartik to scold her always. He finds Kartik a bad person. Naira doesn’t want Kartik to feel sad on hearing Kairav’s judgement. She is sure to change Kairav’s mind. Kairav tells Vansh that he is staying at Goenka house just because of Naira. Pallavi overhears this and misunderstands Naira for coming back in Kartik’s life. Kartik and Naira make plans to connect with Kairav.