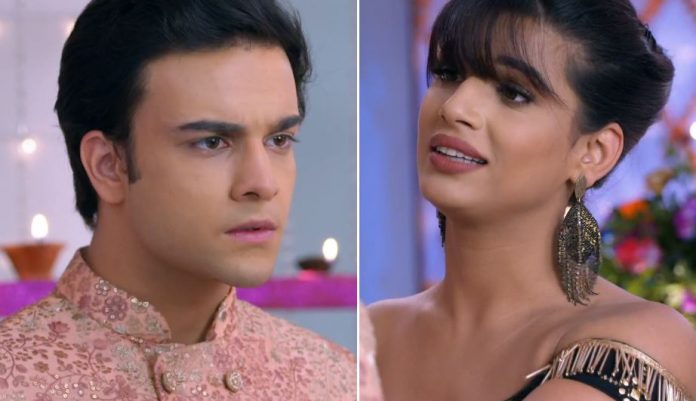 Kumkum Bhagyaa Tonight Ranbir Prachi Rhea love twist Vikram loses many bets and still gets into another bet with Mitali. He tells her that she is talented to fight with her mum-in-law without any issue. She tells him that she is feeling bad of his words. She demands a necklace. Vikram tells her that he wants to know what angers a daughter-in-law. He lies that he doesn’t want Pallavi and Dida to fight. She tells him that he is handling them well, that’s why they don’t fight. She tells that the credit goes to him that they aren’t fighting. She tells him that he doesn’t praise them in front of each other, which doesn’t let them get insecure and jealous.

He gets the idea to praise Pallavi in front of Dida and vice versa to make them insecure. He wants Pallavi and Dida to fight so that he can win the bet. Meanwhile, Ranbir tells Prachi that Sanju isn’t a right guy, he was flirting with her. She doesn’t give him any right. He warns her about Sanju’s cheap intentions. He gets angry on her for forgetting her limits. They end up into an argument. Ranbir asks her to do anything she wants. He doesn’t want to comment on her character. She tells him that Sanju and anyone else can anger him by flirting.

He taunts that she was enjoying Sanju’s flirting. She gets angry when he misunderstands her. He feels he was wrong to find her different from the rest. Rhea gets happy seeing their fight. Pallavi questions Vikram about his gestures exchange with Mitali. He praises Mitali to grow Pallavi insecure. She doesn’t take it light. He tells her that Mitali was appreciating his love for Dida. He gets praising Dida to the highest level, which angers Pallavi. He gets happy that his plan is working. He wants Pallavi to vent anger on Dida. He gets happy and awaits the fun. He wants Dida to not spare Pallavi.

On the other hand, Abhi and Pragya romance. He is happy to get her in his life after many years. He relives his old days. He madly loves Pragya. He tells her that she loves him a lot. Abhi doesn’t want the romantic moment to end. Abhi acts to get electrocuted. Pragya hugs him. He tells her that he is ready to get the shock if she will hug him with love. Ranbir tells Rhea about Prachi and Sanjay’s love story. Rhea tells him that Prachi would be loyal to the one she commits. She asks him to make her plan work out. He gets confused.

She asks him why was he fighting with Prachi. Ranbir agrees to work out her plan by breaking Prachi and Sanju’s love story. Rhea asks him to accept the challenge and prove his love. Ranbir gets upset that Prachi called him a bad person. Abhi scares Pragya to hug her. Pragya gets really scared when the house helper comes there. He assumes her to be the ghost. He then gets a relief. Sanju wants to wait for Prachi’s response. He respects her. His friend makes him against Ranbir.