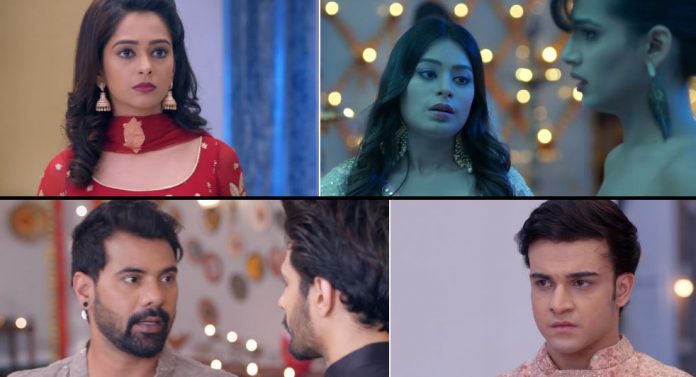 Kumkum Bhagyaa Shocking Aftermaths Prachi Sanju is sure to marry Prachi and take her home. Prachi stays away from Sanju. The guests gossip about Prachi and call her a characterless girl. Ranbir can’t believe this. Rhea thinks everyone will not blame her. She acts innocent when Aaliya questions her. She frames Prachi badly. She wants to know about Abhi. Aaliya doesn’t comment much. She asks Rhea to get Prachi out of the room. She doesn’t want anyone to stop her. Meanwhile, Abhi is at Disha’s award. He tells Purab that he has saved him from Aaliya. Purab thanks Abhi for his favor.

Abhi asks him to be more grateful and make his name’s tattoo. Abhi wants him to tell him about visiting Disha next time. Purab tells Abhi about his findings about Disha’s lie. He tells that Disha has no affair with Ritik. Disha realizes that she has told wrong about Ritik to Purab. She asks him to celebrate Diwali with her, since Abhi and Purab are here. He catches her lie. She tries to cover up her plan to mislead Purab. Prachi gets to consciousness, aware of Rhea’s worst plan against her. Sanju wants to keep his good image so that she gets his support.

He wants to win her trust so that she agrees for marriage. He behaves good and innocent. Rhea reaches Prachi to take her. Prachi asks Rhea the matter. Rhea informs her that Aaliya has summoned her. Purab tells Abhi that he had answered Disha’s call and got to know the truth. Abhi knows the reason for Disha’s lie. He asks him to find out why is Disha lying. He feels Disha still loves him and doesn’t want him to go away. He asks Purab to marry Disha. Purab asks Abhi not to joke. Abhi knows that Purab is scared of rejection.

Purab knows that Disha will really reject him. Abhi enjoys playing the cupid between Purab and Disha. He laughs seeing Purab’s jealousy. Abhi finds an idea to know about Disha and Ritik. He reminds his favorite card game by which they can make Disha admit the truth. Purab is proud of him. Dida and Meer rejoin the party and find the odd silence. Priyanka reveals about Prachi’s indecent act. Abhi asks Disha and Ritik to play the black card game with them. Purab asks her to say the truth.

Ritik knows about the game rules. Abhi tells Purab that Ritik looks like a champion. Shahana learns about Prachi falling into a bad trap. She wants to know who is behind this. Shahana can’t believe it. She defends Prachi after hearing the nonsense from Priyanka. Ranbir stays tight lipped. He doesn’t know whom to believe after watching the live footage. Pragya calls Prachi to inform her about her arrival. She worries for Prachi when the latter doesn’t answer the call.