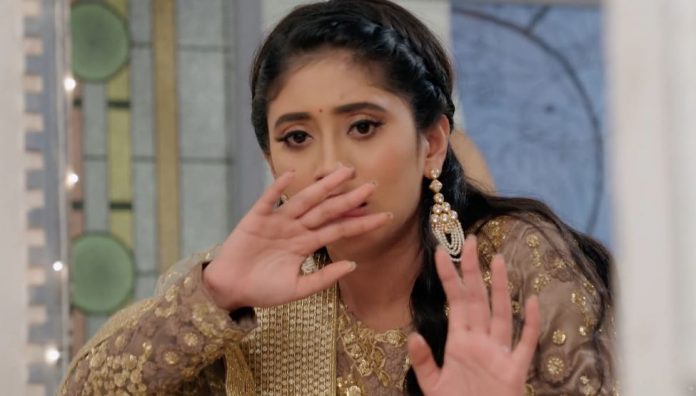 Yeh Rishtta Starplus Naira scary disturbing vision Kairav tells Kartik about his old dad who always scares and scolds Naira to hurt her heart. Kartik learns the complains about himself that has hurt his son’s heart. He wants to rectify his mistakes and prove out to be the best. Kairav tells that he doesn’t like to see his mum upset. He tells Kartik that he will return him from where he had ordered him if he fails to keep Naira happy. Kartik assures to keep Naira happy, since his name is Jolly Singh. Kairav reads out his terms for Kartik. He asks Kartik to behave well with Naira. He tells that he shouldn’t scold, lie or hurt Naira. He asks Kartik aka Jolly Singh to sign the letter to confirm his consent.

Kartik gets worried since he is lying to Kairav. He signs the letter and hugs his son. Naira disapproves Kartik’s move. She asks him why did he fulfill Kairav’s stupid wish by becoming kiddish himself. She tells him that once Kairav knows his lie, he may get away from him. Kartik feels the pain of separation already. He doesn’t think that things can get more worse. He asks Naira to have faith in him. He doesn’t have any option, else he would have not lied to Kairav.

He knows he is doing wrong by risking it all, but he has hopes to win his son’s love by the drama. She feels he has put everything at stake. He tells her that he is happy to hug Kairav after long time. She tells him that Kairav will break his heart on knowing the truth. He doesn’t want to agree with Naira. Kartik goes to meet Kairav. He overhears Kairav and Vansh’s conversation. He tells Vansh that Kartik was a good dad, not but a good husband for Naira. He tells that its important that his new dad is a good husband for Naira.

He gets innocent in his talks. He wants to return the new dad if he fails to keep Naira happy and protect her. Kartik and Suwarna get emotional and like his cute talks. Kartik feels Naira has given him good values and made him responsible. He feels proud of Naira. He wishes that his child is always responsible and protective towards Naira. He feels he has just given hatred to Naira, but still she has just filled love in Kairav’s heart. Naira gets a scary thought. She wonders what did she see and who was getting hurt in her dream. She doesn’t realize that the danger is over Kartik and Kairav. She worries that someone from her family is falling in a big trouble.

She tries to shoo away the bad thoughts. She wants to know if the dream was some sign of the future. Kairav asks her to come along and see the wonderful surprise. They get big surprise when they find Kartik’s sweet Smiley decorations all around. Naira doesn’t think that Kartik would win this way. Kartik asks Kairav to come for cake cutting, none can end their happiness. Kairav tells them that he is much happy to have them. He cuts the cake with them and kisses them. He gets adamant and wants them to kiss. Kairav misses Kartik at times. He then realizes that Kartik has hurt Naira. Kartik kisses Naira to fulfill his wish.