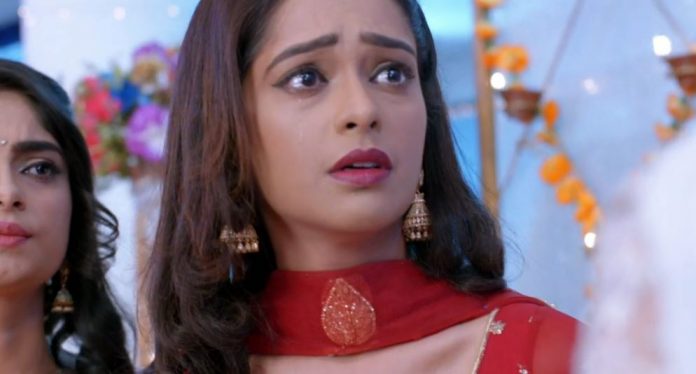 Kumkum Bhaagya Abhi stunning move for Prachi Rhea blames Prachi for the cheap act. Prachi doesn’t understand the accusations at first. Aaliya and Rhea fume on Prachi and malign her character. They ask Prachi how can she fall so stoop and romance her boyfriend at someone else’s house. Aaliya insults Prachi. Sanju doesn’t let the blames come on him by supporting Prachi. Aaliya blasts her anger on Sanju. She asks Sanju if he is after Prachi. She also thinks that Prachi is after Sanju’s richness. She tells them that Prachi was trying to settle herself. She doesn’t want Prachi to work out her wicked things at her house.

Rhea doesn’t leave any stone unturned to insult Prachi. Priyanka gets happy seeing Prachi’s insult. Prachi asks for a chance to defend herself. Her respect gets at stake. Mitali and Dida want Prachi to get a chance. Aaliya doesn’t want to believe Prachi, since they have seen Prachi’s characterless act on the live screen. Daasi feels maybe Prachi is framed and she is really innocent. Pallavi can’t see Prachi’s humiliation. Prachi wants her esteem to stay in tact. She wants to prove her innocence. Aaliya gives her a chance to prove herself.

Rhea’s plan shocks Ranbir as well. Ranbir feels he couldn’t understand Prachi till now. He finds her disgusting. He didn’t know she is a gold differ. Aaliya wants to throw out Prachi from the house. Abhi makes a timely entry and supports Prachi. He doesn’t let anyone insult Prachi. He gives her a fair chance to prove her innocence. He knows Prachi is innocent and can never do anything wrong, since her values aren’t such. He believes her more than Rhea.

Abhi tells them that he doesn’t even need Prachi’s explanation. Prachi gets touched to see how Abhi is supporting her like her father would do. She feels proud of him. Abhi sets an example of unconditional love and trust once again. Will Ranbir learn a lesson from a wrong judgement? Will Abhi be able to defend his daughter against his own family? Keep reading.