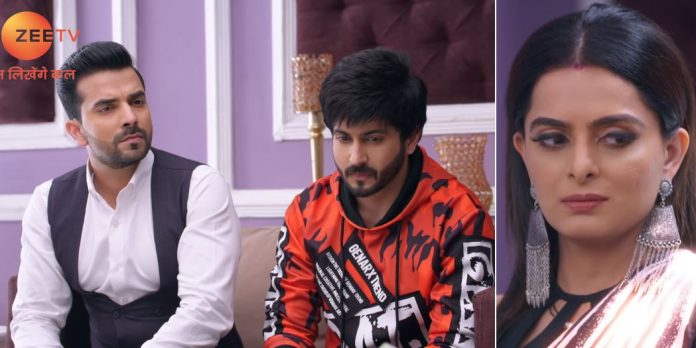 Kundali Bhagyya Shakti Vidya Upcoming Stunners Sherlyn makes a plan with Kareena. She doesn’t want Preeta to know their plans. Kareena warns Sameer against leaking their plans to Preeta’s family. Luthras hire a lawyer to answer Preeta’s notice. Kareena stains Preeta’s character. She admits that Karan married Preeta and dumped her on the same wedding night, knowing about her multiple affairs. Knowing Preeta’s clean character, both Rishabh and Karan get a huge shock. Kareena asks them to lie the same thing in the court to get saved from Preeta’s huge alimony demands.

She wants the divorce to happen with ease. Rakhi feels upset when she learns Kareena’s plans. She doesn’t know Sherlyn has suggested the cheap ideas to malign Preeta’s character. Sherlyn takes her revenge and hurts both Rishabh and Karan’s hearts. Sameer finds hard to keep this a secret from Shrishti, who deserves to know it.

Vidya:
Vidya gets helpless when she learns that Nanku is getting released after the court verdict getting in his favor. She doesn’t want Nanku to get help from Ranjana and Kalindi. He wants justice for all the people killed and tortured by Nanku. She takes the extreme step and kidnaps Nanku’s daughter.

She threatens Kalindi of jumping down the terrace, taking along the baby. She asks Kalindi to give the statement against Nanku. She summons Nanku home. Nanku gets mad knowing Vidya has threatened to kill his daughter. Kalindi gets ready to obey Vidya. Vidya takes the big step to save Vivek from Nanku’s madness. Vidya and Vivek will be seen protecting each other.

Shakti:
Harak Singh gets mad to get after Heer’s life. He fails in his attempt to kill Heer. Preeto becomes Heer’s sole protector. Saya takes a step to fulfill Soumya’s last wish. She takes back Heer to Preeto’s house. Preeto wants Heer to stay happy wherever she stays. She is tired of fighting with her own family. There will be big twists with Heer and Soumya union. Heer comes across Soumya and gives her a new life. Soumya breaks from her coma state. Soumya will empower Heer once again.