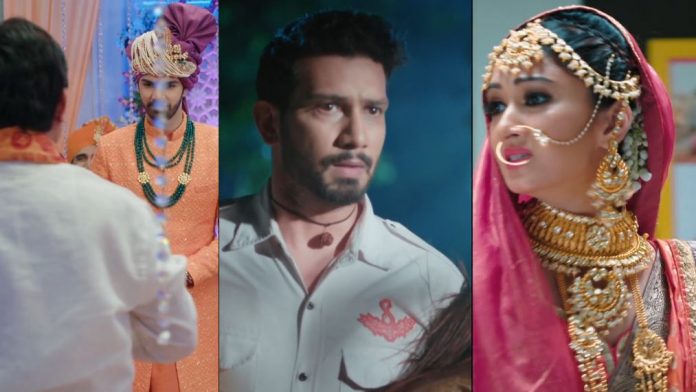 Kahaann Hum Starplus Ronakshi Life changing twists Mahesh’s true face gets known to Sonakshi, while Raima swaps the bride to marry Rohit. Rohit wants to meet Sonakshi once. Pari tells Rohit that she may help him if he also keeps her wish. She wants his shoes to fulfill the ritual and demand money from him. Rohit is ready to give away anything just to get a glimpse of Sonakshi. Rohit gives his shoes to Pari. She helps him go and meet Sonakshi. Akash and Deepa realize that Rohit is madly in love with Sonakshi. Sonakshi shares her problem with Raima. Raima asks her how can she go from the marriage when the baraat has arrived. She asks Sonakshi not to go anywhere.

Sulochana advises Raima that this is the best chance which she should grab. She asks Raima to take Sonakshi’s place and marry Rohit. She tells that fate is giving her a chance to win her lost love again. Raima comes in Sulochana’s words. She goes to convince Sonakshi that she will take her place in mandap and try to hide Sonakshi’s absence. She asks Sonakshi to go and finish her shoot to get rid of her guilt. Sonakshi doesn’t agree initially. Raima explains her that she can get an hour time to return for marriage.

She tells that she has no problem in sitting in the mandap. She lies that she wants to unite Sonakshi and Rohit. She makes Sonakshi believe her by her sweet talks. Sonakshi gets Netra’s call. Netra summons her for the shoot. Raima asks Sonakshi to confirm her leaving. Sonakshi changes her bridal dress. Raima rejoices getting the bridal dress and jewellery, on which she has the sole right. Rohit and Sonakshi have a hit and miss, while she makes a timely leave. Sonakshi looks for her driver Shankar. Mahesh tells her that he had come to secretly take her for the shoot. Sonakshi thanks him.

Raima gets stressed that she will get caught by Rohit. Sulochana tells her that Sonakshi won’t come in time and marriage will complete. She asks Raima not to worry and trick Rohit. Rohit doesn’t see Raima’s face. He speaks to his would be wife. He tells her about Raima’s huge mistake. He understands Raima’s emotions. He feels guilt free to share it with his would be wife. Raima angrily wants to marry him. She can’t afford to lose him. Sonakshi hastily finishes the scenes. Netra feels indebted to her for coming on short notice on her marriage day. She thanks Sonakshi and sends her for the marriage.

Sonakshi tells Sumit that Raima helped her and took her place in mandap to cover her absence. Sumit can’t believe this. He wishes Sonakshi reaches on time and marries Rohit. Rohit sits for the puja and is happy. Veena asks Pooja to get Sonakshi and Raima. Sonakshi speaks to Netra on the way. She gets to know Mahesh’s big lie. She realizes that he is the stalker, molester and culprit whom Rohit was searching for long. She gets worried knowing she has fell in his trap. She tries to get away, but fails. Mahesh tells her that he loves her a lot and today he will marry her. He takes her to the isolated godown. She tries to run.

Mahesh slaps her and makes her unconscious. He takes her for the forced marriage. Sonakshi gets tortured by Mahesh. Pooja learns Raima has taken Sonakshi’s place. She reveals the truth to Rohit. Rohit learns Sonakshi is in trouble. Sonakshi’s kidnapping and forced marriage twist gets known to Sippys and Rastogis. Rohit will be seen fighting the villain Mahesh to get Sonakshi back. Much drama coming up. Keep reading for more on Kahaann Hum Starplus Ronakshi.