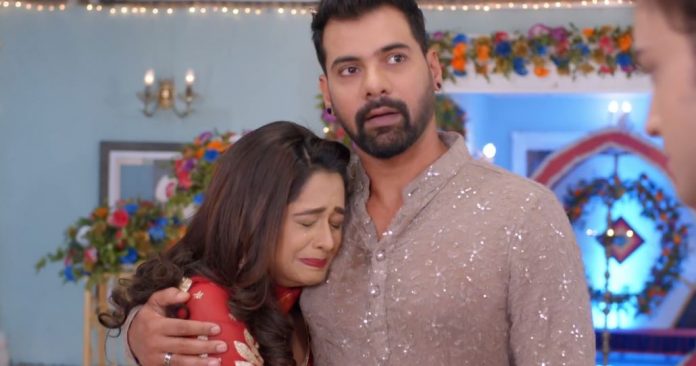 Kumkum Bhagyya Today Abhi entry brings major twists Kumkum Bhagyya Zee5 Abhi entry brings major twists Ranbir tries hard to prove Prachi’s innocence. He tells them that Prachi didn’t do anything wrong and someone is framing her. She tells him that she was dizzy and falling down, while she held Sanju. Ranbir asks her if she was fine. She tells him that she remembers consuming some drink and feeling dizzy. He realizes that someone had spiked her drink to put her in trouble. She tells him that Sanju was trying to help her. She narrates the entire incident to Ranbir. The family hears her explanation. Prachi cries her innocence. Ranbir sympathizes with her.

He tells her that its not her fault, someone from the family had conspired to defame her. Rhea, Priyanka and Sanju get super worried when Ranbir gets doubting them. Abhi makes a timely entry. He tries to know the matter. Aaliya finds Prachi’s story convincing. She decides to make Prachi out without any drama in front of Abhi. She doesn’t want Prachi to visit them again. Prachi tells Abhi that she didn’t do anything wrong. Abhi believes her blindly. He tells her that the family has to accept her innocence. He supports Prachi.

He tells her that party won’t end until they find the culprit. He seals the exits. He asks Vikram to question the waiters and let Prachi identify the waiter who spiked the drink. Rhea worries that Abhi will keep his word to Prachi. Priyanka tells Rhea that Shahana had hit on her head and run away. Rhea is angry that Abhi is consoling Prachi and Shanana. She tells Priyanka that Abhi has arrived and supporting Prachi. She knows Abhi trusts Prachi a lot. She tells Shahana that she didn’t had any back up plan.

She asks Priyanka to plan something to stop the waiter from naming them. Rhea fears that Abhi will bash up the culprit and make him admit truth. Abhi wants Rhea to be with him. Abhi assures Prachi that he will fix everything. Prachi trusts him. Rhea prays to get saved once. She swears to not repeat her mistake. Aaliya apologizes for her angry reaction and not trusting Prachi. Abhi asks her to trust people. He regards Prachi as his daughter. Aaliya tells Abhi that situation was really bad. She praises Rhea for trying to stop the cheap scene from playing on the projector screen. Abhi feels proud of Rhea for supporting Prachi.

Mitali and Meera praise Ranbir for his maturity. They like his sense of understanding. Everyone is proud of Ranbir. Sanju’s plan fails. He doesn’t think anyone would support him. He doesn’t want to identify the waiter. He wishes Prachi doesn’t recognizes him too. Abhi asks Sanju and Prachi to identify the waiter once so that they can reach the culprit. Rhea gets into trouble when Prachi identifies the waiter giving her a spiked drink. The waiter panics and tries to run away. Ranbir and Abhi, Prachi’s protectors catch the waiter.

Abhi angrily bashes the waiter to get the truth out. Rhea feels Abhi’s trust on her will break. She doesn’t want the waiter to name her in front of the family. The waiter agrees to reveal the name to save himself. On the other hand, Pragya is busy consoling Purab over his failing love story. Purab sheds tears to lighten heart. He falls weak. Pragya asks him to share happiness with family than being lonely. He is glad to have her. He misses Disha in his life. He asks her if she knows the reason for his separation with Disha.

He questions Pragya’s trust on her. Pragya trusts Purab and knows a misunderstanding ruined Purab and Disha’s relation. Abhi prompts the waiter to reveal the evil-minded person who hired him. Priyanka injures herself with a fruit knife to get everyone’s attention. Abhi worries for Priyanka. Rhea asks waiter to take her at knife point and make an escape. Waiter threatens Abhi of killing Rhea. He wants Abhi to clear the way for his leave. Abhi begs him to leave his daughter. He can’t afford to lose his daughter. He lets the mad waiter leave.

The waiter spares Rhea as per the plan and runs away. Abhi and Priyanka manage to hurt themselves a bit and get saved from the blame. Ranbir doesn’t want to spare Prachi’s culprit. He follows the waiter to catch him and bring him back. He wants justice for Prachi. Will Ranbir be able to learn Rhea’s ugly truth? Keep reading.

Reviewed Rating for this particular episode: 5/5
This rating is solely based on the opinion of the writer. You may post your take on the show in the comment section.