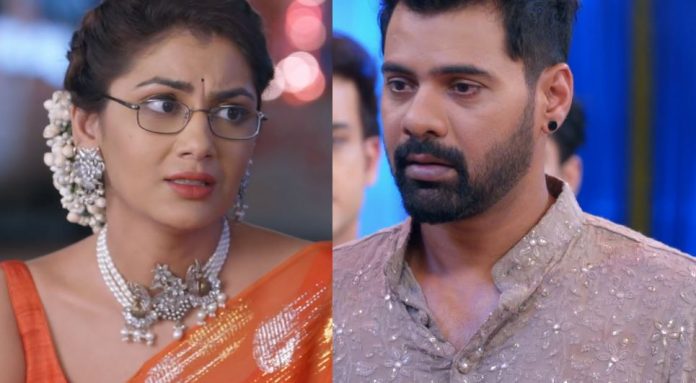 Kumkum Bhhagya Zee5 Tonight Highlights twists Pragya answers Purab that she trusts him. Purab tells her that he didn’t cheat Disha. He tells about the misunderstanding which led to his separation with Disha. He tells her that Disha has derived the wrong meaning, he was always loyal to Disha. He expresses his love for Disha. He wants Pragya to explain this to Disha. Pragya tells him that she will believe him, but can’t deny Disha as well. Purab tells that he never thought of cheating Disha. He feels Disha had left from his life and broke his heart. He tells about Disha’s lie regarding dating Ritik. He feels hurt. Abhi informs the commissioner about the waiter’s escape.

He wants the police to catch the culprit. Rhea fears that she will get caught. She cries while making prayers. Aaliya understands that Rhea has done something wrong and is afraid. Abhi and Meera console Rhea. Aaliya tells Abhi that Rhea is feeling guilty to scold Prachi. Abhi asks Rhea to sort out the issues. Ranbir fails to catch the waiter. He feels sorry that he couldn’t get justice for Prachi. Abhi apologizes to Prachi. She is grateful that Abhi trusted her. He feels she has earned the trust. Ranbir tells them that everyone needs to apologize to Prachi for misbehaving with her and insulting her, when she isn’t at any fault.

He gets into an argument with Aaliya. He wants Prachi’s respect to be restored. Ranbir tells Abhi that Aaliya had insulted Prachi and her mother’s upbringing as well. Abhi feels sorry that Prachi had tolerated all this in his house. He can’t believe that he wasn’t with Prachi when she needed him. He wants Aaliya to apologize. He can’t understand why Aaliya and others have blamed Prachi. He didn’t wish Aaliya to face him first. Daasi and Dida ask Aaliya to apologize. Aaliya doesn’t think her reaction was wrong. She apologizes to Prachi, clearing the fact that she doesn’t mean it. Abhi apologizes on Aaliya’s behalf.

Prachi feels sorry for her mum. She wants to prove her mum’s values. Abhi is very well aware of her emotions. Prachi feels its wrong that her mum got insulted in Abhi’s house. He pacifies Prachi and Rhea. Abhi asks Ranbir to drop Prachi home. Sanju gets a clean chit. Abhi asks her to go home. Sanju gets into an argument with some men. Sanju lies that Prachi likes him. Ranbir sends the guests. Sanju praises Ranbir’s heroic act. Ranbir asks him to stay away from Prachi. Prachi and Shahana meet Sanju.

Shahana tells Ranbir that Prachi had slapped Sanju when he proposed her. Sanju doesn’t think Prachi did anything wrong. Prachi asks Sanju to return to their hometown. Ranbir wants to handle Sanju. He knows what is Sanju planning. He gives an ultimatum to Sanju. Sanju gets helpless to leave. He wants to make a return to get his bride. Later, Pragya tells Purab that he needs to win Disha’s trust again. He asks her if love doesn’t matter. She tells him that trust matters more than love. She finds his life complicated, since he is married to Aaliya. She tells him that once he wins Disha’s trust, he will win her love too.

Abhi takes care of Rhea. She feels Abhi loves her a lot. She just wants him to not care of Prachi. He asks her to think different and trust Prachi, unlike the crowd reacts. He feels fortunate that Meera messaged him on time. Aaliya gets angry on Meera for informing Abhi. Ranbir comforts tensed Prachi. He drops her home. Ranbir gets falling in love with Prachi. Prachi is grateful to him. He apologizes to her. She asks him the reason for helping her. He tells her that he couldn’t see her in tears and his heart made him take a stand for her.