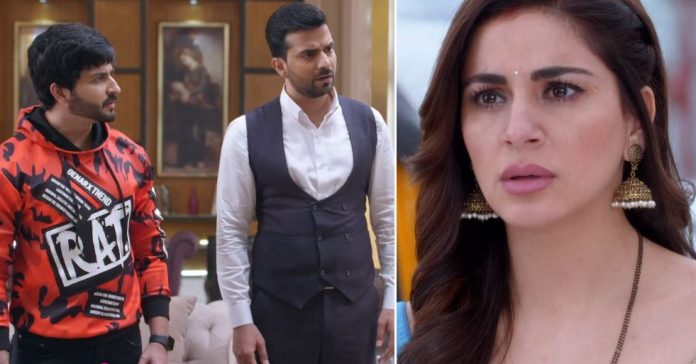 Kundali Bhagyya Zee Karan Preeta Sherlyn new conspiracy Kareena reprimands Preeta for her plan to send Shrishti for spying on Luthras. She asks Preeta to come and get Shrishti, else Shrishti will get arrested. Preeta rushes to save Preeta. Shrishti emotionally moves everyone by reminding them their past equations. She can’t believe that no one believes Preeta. Rishabh tells her that she can’t feel their pain. Shrishti wants to know what did Preeta do. Kareena doesn’t let anyone reveal about the notice sent by Preeta.

Kareena tells Shrishti that Preeta isn’t Rishabh’s friend or Karan’s lover. She tells that Preeta doesn’t deserve to become their family member. She feels Preeta is selfish and doesn’t care for anyone. She accuses Preeta for marrying Karan just for money. Shrishti can’t believe Karan’s accusations. Kareena tells Shrishti about the notice, which cleared Preeta’s motives. She tells that Preeta would be coming to take her. Karan tells Kareena that he hates Preeta and doesn’t want to see her face. He gets angry knowing Kareena called Preeta home. Rakhi tells that she didn’t expect Preeta to take this step.

Rishabh tells Shrishti that he had always supported Preeta against his family, but Preeta had really disappointed him. Shrishti bears the humiliation. Sherlyn gets happy on seeing Kareena’s wrath. Shrishti tells Kareena that Sherlyn is the real culprit ruining Luthra family. Kareena doesn’t believe her. She asks her not to blame Sherlyn by staining her character. She feels Sherlyn is a nice girl. Shrishti asks Kareena not to take revenge on Preeta. Kareena doesn’t believe her. She throws out Shrishti, which shocks Preeta.

Preeta asks Kareena to stop insulting her sister. Kareena doesn’t limit her tongue. She doesn’t spare Preeta as well. Her anger gets high recalling the notice when Preeta seems ignorant. Kareena asks Preeta to stop the innocent drama. Preeta answers Kareena. Kareena insults Sarla as well. She feels Sarla is a disgusting woman. Preeta and Shrishti want to know the reason for Kareena’s hatred. Kareena tells them that Rishabh and Karan didn’t get trapped by them. Shrishti loses her cool. Preeta slaps her to calm her down. She takes the step to protect her sister. Kareena tells Preeta that Luthras will give her an answer legally. Preeta gets puzzled. Kareena tells Luthras that Sameer is emotional about Shrishti.

She doesn’t want Sameer to melt down his heart. She tells Rishabh that she was helpless to throw out Shrishti. She doesn’t want her family to misunderstand her. She asks Karan to stay away from Preeta, who wants revenge on them. She doesn’t want Karan to fall in another trap. Rishabh tells Kareena that his family won’t tolerate anything wrong. Kareena wants Karan to remarry. Karan doesn’t agree. Sherlyn asks them to throw out Preeta from their lives. She acts sweet to win Rishabh’s trust. She tells them that she isn’t their enemy, as Preeta always projected. She asks them if she had hurt their heart ever.