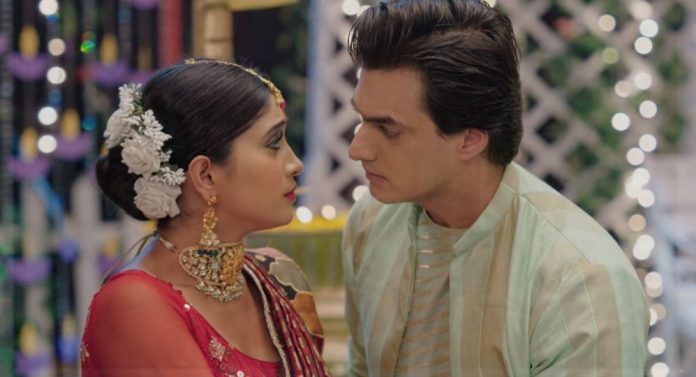 Yeh Rishhta Kartik arrested New Murder Mystery Upcoming Kairav surprises Kartik and regards him the best dad. Kartik gets too joyed when he finds Kairav wishing to celebrate his birthday with him. He gets emotional. Vansh and Kairav thank Naksh for helping them arrange the lovely surprise. Kartik, Kairav and Naira cut the cake and celebrate the birthdays. Kartik couldn’t ask for anything better on Diwali. Kairav apologizes for hurting him. Kartik forgets the annoyance phase. Naira asks the men to play dhol. She dances with joy. She asks the family to join her, since its double celebrations on the Diwali. The Goenkas dance and rejoice the union of Kartik and his son.

Dadi arranges a Diwali puja. Dadi wants Kartik and Kairav to make prayers alone. Kairav feels weird again, but Naira manages the matter. Dadi wants them to complete the puja within the auspicious time. Kairav loves Kartik like before. Naira gets pleased with the sight. Gayu tells Suwarna that the perfect appearing thing will soon change with Vedika’s return. She alerts Suwarna that things will get ruined once again, if Vedika tells Kairav about the marriage truth. Suwarna isn’t scared to face the day.

She finds Naira getting upset because of Gayu’s warning. She tells Naira that they should not lose the happiness of the present while worrying for the future. She asks Naira to enjoy the moment with the family. Naira finds Gayu’s prediction true. Suwarna wants her children to stay happy. Naira wants to protect Kairav from the truth. Naira thinks Kartik and Kairav can’t stay under one roof when Vedika returns. Kartik misses Vedika’s calls. Vedika calls him repeatedly. She wants Kartik’s help to get saved from her psycho lover.

Kairav asks Kartik and Naira to make a promise that they will stay with love and never fight again. He wants his parents to be happy. Kairav tells them that he wants their togetherness. Kairav’s innocent appeal touches their heart. Kartik and Naira know that this can never get possible, they can’t stay together. They hide the truth from Kairav. Kairav makes them sign the deal and tells them that he will remind them about the deal if he finds them fighting. This makes Kartik and Naira realize their reality. Goenkas get emotional. Vedika is in much trouble. She wants Kartik to save her life.

She knows none can understand her, Kartik is her husband and also her friend. Goenkas celebrate Diwali with Naira. Kartik dances with Naira and Kairav. They have grand celebrations. Vedika calls Kartik and learns that he is with Kairav. She realizes that Naira is also in Goenka mansion. Naira wants Kartik and Vedika to be together. She recalls her promise to Vedika. Kairav makes Vedika’s name diya away, while Naira tries to bring Kartik and Vedika’s diya closer in the pool. She wants to make her diya away to keep her promise. Kartik stops her from distancing herself. They get into a moment. Vansh makes him realize the incoming call.

Kartik and Naira worry about Vedika’s disturbing call. Kartik tells Naira that Vedika is in Udaipur and wants to meet him at some hotel, rather than coming home. She suspects that Vedika has seen them together and got upset. She feels she is cheating Naira. She asks Kartik to find out what’s bothering Vedika. She doesn’t want to ruin his marriage. He asks her not to feel guilty. She senses some problems. She wants Vedika’s Diwali to be good as well. He tells that he will not inform the family about Vedika, since they may take tension. He wants to find out the matter first.

She tells him that he should not meet Vedika as soon as possible. Kartik tells her that he will meet Vedika in the morning, since he doesn’t want Kairav to doubt on him again. He wants to bring Kairav close to the family. He doesn’t want to spoil the Diwali celebrations. He thinks to meet Vedika and decide later. Vedika protects herself from the bad guy. She awaits Kartik. She feels Kartik deserves to know the truth so that he helps her out. Naira stays stressed. Kairav wants to sleep in Kartik’s room. Naira refuses. Kartik helps her by making a story to convince Kairav. He mocks her snoring and asks Kairav to sleep along Naira itself.

He relieves Naira by telling her about his conversation with Vedika. Naira too wants to meet Vedika. Kartik goes to meet Vedika and finds some trouble around. Vedika gets attacked by her ex. Vedika defends the attack to save herself. There will be huge murder drama in the show. Kartik will get arrested for attacking Vedika’s ex. Vedika and Naira will be seen trying to defend Kartik from the false accusation. Goenkas will get a big shock with Kartik’s arrest.