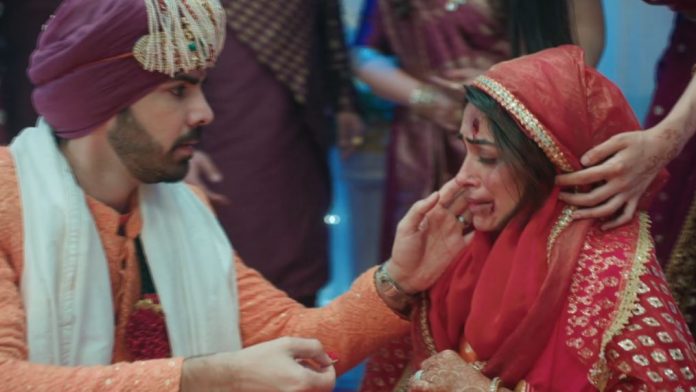 Kahaan Hum Shocking Drama Obsessed Mahesh returns Yash observes Pooja’s tension. He wants to know the reason of her unhappiness at her brother’s wedding. He thinks to ask her. Pooja dislikes the fact that Rohit is marrying Raima by cheating the family. She can’t tolerate it further. When she gets away from the mandap, she breaks into tears. Yash meets her and asks her about the tension. Pooja faces emotional breakdown. She tells Yash about Rohit’s move to marry Raima, by taking Sonakshi into confidence. She gets much upset. Yash can’t believe when she narrates the entire thing. Yash wants to stop the marriage and reveal the truth to Rohit.

Pooja tells him about Rohit’s wish to marry Raima. She asks him to let the marriage happen. Rohit takes rounds with Sonakshi only, not Raima. Sonakshi gets herself swapped in bride’s place at the right time, by taking Sumit’s help to convince Raima. Rohit and Sonakshi’s marriage completes when Suman does her Kanyadaan. Suman gets the respect as Sonakshi’s father would have received on this day. She feels proud when Rohit sings her praises for raising Sonakshi alone. Suman performs the rituals. She gives Sonakshi’s hand to Rohit. Suman blesses them. The pandit tells the family that Rohit and Sonakshi’s marriage is complete now.

Yash gets worried. Pandit asks Rohit to complete the remaining rituals to solemnize. Rohit takes the sindoor for his wife. Rohit gets a huge shock on finding Sonakshi in the miserable state. The family too worries for Sonakshi. Rohit asks her what has happened to her. She falls unconscious. The media doesn’t spare them. They make it a breaking news. They want to know what happened to Sonakshi. Rohit yells at the media for being so insensitive. He asks the media to get away and wait until they are ready to talk. Sonakshi gains consciousness.

She asks the kinners to stay back with her family. She cries out when he calls Mahesh for help. She breaks down and reveals that Mahesh is responsible for her state. Rohit tells Yash that he had a doubt on Mahesh, but Yash didn’t listen to him. He is much angry that Mahesh got away with Sonakshi, by cheating everyone. He wants to kill Mahesh. Sonakshi knows Mahesh’s madness. She stops Rohit from taking risk. She asks him to just stay with him. He feels guilty that he couldn’t protect her.

She tells him that she is at fault to leave the marriage and go for the shoot to secure jobs of the show crew. She wanted to do good and seek blessings. She didn’t know she will get kidnapped by Mahesh. She tells Rohit that she managed to escape by much difficulty. She recalls that she tried to take help from her fans, who were tricked by Mahesh. Mahesh captures Sonakshi. She gets help from the kinners. Mahesh wants to fulfill his dream by marrying Sonakshi. He attacks the Sippys. Rohit defends the attack and bashes him up. He gets Mahesh arrested.