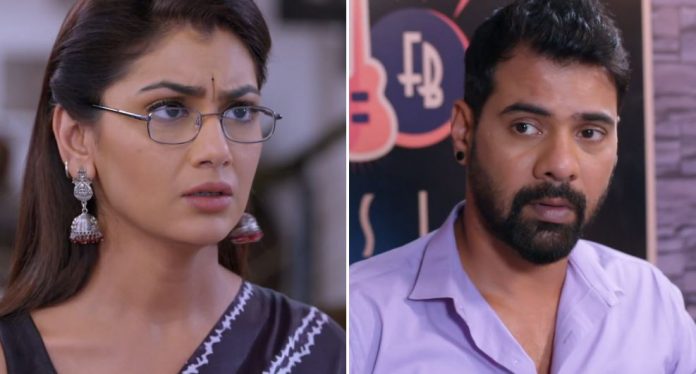 He feels she should be safe. Priyanka lays a trap for Rishi. She takes the cab driver’s phone to call Rishi. Pragya is upset that Abhi misunderstood her. Priyanka calls Rishi to apologize. Rishi asks her not to apologize and cry, its all over between them. She tells him that she is really feeling sorrowful. She wants to meet him for the last time. Pragya asks him not to meet obsessed Priyanka. Priyanka fakes a drama to win his sympathy. She asks Rishi to think of it as her last wish and come to meet her. Priyanka manipulates him cleverly. Pragya opposes Priyanka. Rishi’s heart melts for Priyanka. She calls him at the cliff.

He tells her that he will meet her for few minutes and return home. He doesn’t tell anything to Pragya and makes a leave. He makes a terrible mistake. Abhi informs Pragya about Rishi and Priyanka’s meet. Abhi tells her that Priyanka wanted to meet him. Abhi feels Rishi is lying. She tells him that Rishi didn’t call Priyanka, she is a liar. She tells Abhi that Priyanka is up to something. She wants to go there and safe Rishi. Later, Priyanka meets Rishi and apologizes. Rishi tells her that he won’t be believing her love, since she ruined him. He hates her. He tells her that its better to die than getting such mad love.

She asks him to forgive her once. She begs him to listen to her. She expresses her love. She gets psychotic again to get him. Rishi gets worried. He feels he did a mistake to meet her again. She feels they complete each other and should get married. She cries to stop him. She is glad that he can’t see her crying. She asks him to marry her. He gets shocked seeing the marriage arrangements she had done. He asks her about the stupidity. She wants him to let the marriage happen. He feels she is a big mistake of his life.

He rejects to marry her. He gets raging at her. Priyanka determines to stop him. Meanwhile, Ranbir thinks of Prachi. He wants to know her more. He tells Pallavi about his choice of girl. She asks him to get scared of her like Vikram is scared. He tells her that he can explore some options in life. He wants to discuss it with his mom. She tells her about her choice of Bahu. She confuses him more. She tells him that Prachi is the kind of girl he would like to marry. He gets uncertain. Priyanka is left at the cliff alone, while Rishi walks out. Will she attempt suicide to frame Rishi again? Will Abhi Pragya be able to save Rishi from mad Priyanka this time? Keep reading.