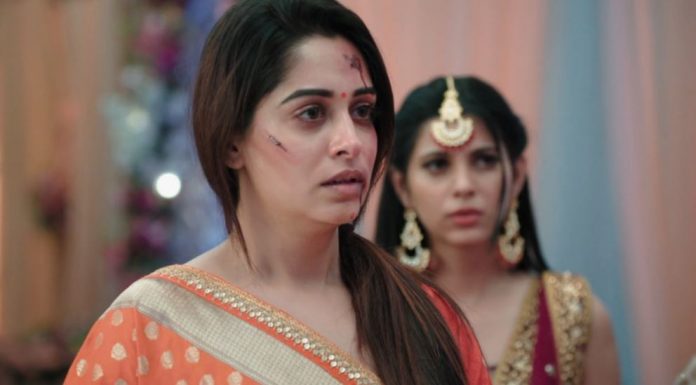 Kahan Tum Starplus Tonight Post Wedding shockers Sonakshi reveals to Rohit how she had struggled to get saved from Mahesh. She gets timely help from the kinners. She feels fortunate that the kinners didn’t get misled by Mahesh and took the right step to bash up Mahesh. Kinners believe Sonakshi is in real trouble and Mahesh is clearing tricking them. Sonakshi tells them that she has to reach her house for her marriage. She feels she will be upsetting everyone if they get to know about her absence. Kinners understand her concern and help her out.

They take Sonakshi home and also make way for her to reach her room, where she can take the bridal avatar for her marriage without letting anyone know about her. Sonakshi is more than grateful to them. She thinks she got married to Rohit because the kinners came ahead to save her. She is also thankful to Raima for taking her place and buying some time for her return. The kinners bless the newly weds. Suman asks Sonakshi about Raima taking her place. Pooja tells them that Raima lied to her and really wanted to marry Rohit.

Rohit criticizes Raima. Sonakshi protects Raima from his wrath. Suman and Veena find Raima disgusting. Raima regrets for her actions. She genuinely apologizes to them. She feels its their true affection that made her realize her mistake. Suman slaps Raima. She can’t believe that Raima was snatching Sonakshi’s happiness. Raima tells them that Sulochana had filled poison in her mind and that’s why she started feeling that she will win Rohit’s love this way by marrying him. She feels she did wrong to fall in Sulochana’s words. She falls in their sight. She feels bad that nobody is forgiving her.

She asks Sumit to take her with him, since she isn’t able to face them. Sumit makes an apology from her side, knowing she is good-hearted. Sonakshi forgives Raima. She gets another shock when Mahesh makes a dangerous entry there. Mahesh angrily tries to hurt them. He threatens of harming the family if Sonakshi doesn’t come with him. Rohit and Sonakshi’s marriage doesn’t shock him. Mahesh is ready to accept her. He tells her that he loves her a lot. Rohit and Sonakshi try to trick him to trap. Mahesh doesn’t want to spare Rohit. He threatens to kill Rohit, so that Sonakshi comes back to him. Mahesh misses the shot.

Rohan gets shot instead Rohit. Mahesh gets caught by police. Mahesh tells that Sonakshi is his Parvati. Rohit finds his brother shot. He loses his mind and beats Mahesh a lot. Naren fears that Rohit will land in jail if anything happens to Mahesh. He slaps Rohit to stop his mad rage. Rohit protects Sonakshi from Mahesh’s scary stares. Naren asks Veena to conduct Rohit’s post marriage rituals. Rohit wants to go with Rohan, but stays back for Sonakshi. Pari gets worried for Rohan. Yash is miffed that the reporters are behaving inhumane and making news of their family problems. Veena stops the rituals which shocks Sonakshi. There will be new twists with Sonakshi’s farewell and homecoming rituals.