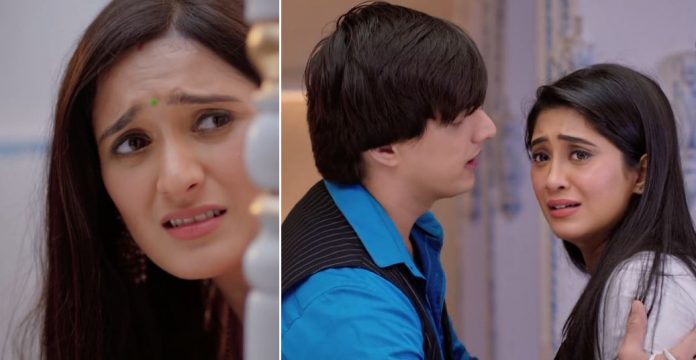 Yeh Rishta Today Vedika unexpected move scares Naira Dadi gathers the entire family to make a declaration. Kairav and Vansh call everyone on her word. Dadi tells them that she has spoken to their family Guru ji. She makes them talk to Guru ji on the phone call. He tells them that Kartik and his wife have to perform the Shanti puja for the house peace and happiness. Kartik doesn’t want to perform the puja with Vedika. He wants to tell them about Naira. Dadi gives her word that Kartik and Vedika will perform the puja. Naira feels bad that she has to leave from Kartik’s life. She doesn’t want to complicate their lives further. Vedika observes Kartik and Naira stealing glances. She understands that there is something cooking up. Naira makes a leave.

She goes to Singhania house to share her shocking problems with her family. She tells her family that Kartik has confessed love to her and even she loves him. She tells that Vedika isn’t at fault, she couldn’t enjoy her married life at all because of Kairav’s meeting with Kartik. She didn’t wish to spoil Vedika’s marriage. She tells them that she feels miserable to come between Kartik and Vedika, which she never intended.

She loves Kartik and wants to love him forever, but without hurting Vedika’s sentiments. She feels Vedika also deserves Kartik’s attention. She knows Kartik may never love Vedika, which is the irony. Naksh understands that Naira is longing for Kartik. He feels sorry for her dilemma.

Bhabhimaa and Devyaani feel Naira has done right to come home, since they wanted her back too. They don’t want Naira to get blamed by the society. Kairav informs Kartik that Naira had gone to meet Naksh and family. Kartik wants to meet her. He doesn’t want her to run away from his questions.

Consequently, Naksh consoles Naira, who feels nothing can get fine with Kartik’s growing feelings. Naira feels she isn’t made for Kartik, since they get separated again and again. She wants Vedika to get a chance to fulfill her love. She tells that its tough for Kartik to choose his love. She feels sorry for Kairav, who doesn’t know the truth of his relation. Naksh assures that he will always support her. He tells her that she needs to be careful while dealing with Kairav.

He tells that Kairav won’t be able to accept Vedika’s truth. Vedika is grateful to Kartik for showing a big heart and trusting her, instead doubting her about Akshat. He tells her that he is her friend and understands her. She asks him to have his favorite kachori. He just wants to rush to meet Naira. She finds him troubled. She thinks he is definitely thinking about Naira. Naira wants to stop thinking about Kartik. Kartik and Goenkas arrive to meet her happily. Goenkas invite Naira for the puja.

Kartik tells Kairav that he will never let his mum (Naira) go away. Kairav demands them to play a game. Kartik wants to make Naira confess love. He supports Kairav’s idea. They make a game plan. Vedika also agrees to play to keep a watch on Kartik and Naira. She is sure that truth will come out soon. Kartik plays the hide and seek. He gets blindfold and still reaches Naira by sensing her around. Vedika wants to know what are they hiding from entire family. Naira wants to get distanced. Kartik asks her not to cheat. She clears that she doesn’t want to cheat either. She asks him to think about Vedika’s heart break.

She tells him that she just wants to ensure the family’s happiness and trust. He is fed up thinking of others. He tells her that they are cheating themselves by lying that they are happy without each other. He doesn’t want to cheat Vedika by lying further. He tells that he can’t lie to his family further. He wants his wait to get over. He tells Naira that he will never cheat anyone now. He tells Kairav and Vansh that he has decided everything, he has found a solution too. He wants to tell the family that he loves only Naira. Vedika overhears them and shatters. She feels all her hopes and dreams got over. Naira feels Vedika had known their mutual feelings. Vedika makes an unexpected move, which makes Naira tense.