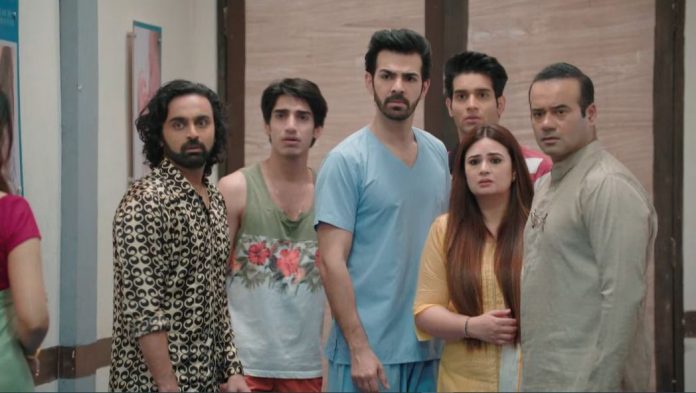 Kahaan Hum Starplus Latest Shocker for Sippys High voltage drama Nishi arrives home and learns a shocking news that Pooja is hospitalized. Sonakshi gets pacified by Rohit. She wants to apologize to Naren and Veena. He asks her not to do the unnecessary things, since its not easy to please everyone in his family. He asks her to just keep Veena happy, who matters the most to him. He learns that Naren and Yash have arranged the blood. Rohit rushes to his doctors team for the blood transfusion. He proceeds with the treatment. Pooja gets into a stable condition, while everyone waits for Rohit’s word of assurance. Rohit tells his family that Pooja is fine. Yash is much thankful to him.

He goes to meet his daughter. Sonakshi bonds with Veena and Naren with her concern. Naren doesn’t want to scold Sonakshi again. He feels bad of his anger. Veena feels the matter has got solved finally. She hopes that they don’t face any other problem now. Rohit tells her that problems are beginning again since police has arrived. He protects his family. Tapasya gets the police there to question them about the suicide case.

Inspector asks them about the unreported suicide case. Rohit and Sonakshi deny such case. Inspector threatens to take action against the person responsible for suicide triggering. The Sippys are worried since they have to handle the media and police together. Rohit denies the news. Inspector speaks rudely with them. Sonakshi shows her star power once again. She limits the inspector from misbehaving with her family. She asks him to speak well with manners. Inspector doesn’t want to talk to her. Rohit insists him to just talk to Sonakshi, who would be dealing the matter. Tapasya adds up troubles.

She taunts Sonakshi about the suicide case hidden from the police. She tells that she just wanted to help and informed the police. Sonakshi understands her evil plan. She states that Suman had chest pain and got admitted in the hospital for a heart surgery. She tells them that Suman is a heart patient and Rohit is her surgeon. She asks inspector to verify the details if needed. Inspector gets convinced on seeing the entry. Tapasya is sure that Sonakshi is lying, since Rohit can easily modify details of patients, being the owner of the hospital. She wants to check the OT. Suman and Pari arrive there at the wrong time.

Sonakshi worriedly shouts aloud to stop Suman. She acts smart and conveys her message well. She makes Suman and Pari hide from Tapasya. Tapasya understands that Sonakshi is trying to cover up her lie by her loud talk. She misses to see Suman. She tells Sonakshi that she will expose her lie. Sonakshi convinces the inspector that she isn’t lying, he can even meet Suman if he wants. He doesn’t want to bother the patient. She clears that Pooja didn’t commit any suicide. Tapasya gets the hint and asks Sonakshi why did she mention Pooja on her own.

Inspector also questions the same. Sonakshi tells them that Tapasya was hunting for Pooja’s news and that’s why she had to clear to Tapasya that Pooja is enjoying a holiday with her friends. She asks Tapasya to leave before she loses her patience. She tells the inspector that Tapasya has printed Pooja’s adoption news for her profits. She tells that Tapasya is still after her family to get bytes. Inspector scolds Tapasya for misleading the police for her own motives. Tapasya challenges to find the hidden news and ruin Sippys. Sonakshi slaps her to teach her a lesson.

She warns her against troubling her in-laws, who aren’t from a tv industry. She asks Tapasya to write anything about her, but not involve her family. Tapasya threatens to ruin Sonakshi’s career. Sonakshi gives her another slap to give her breaking headlines. She questions Tapasya about the person leaking Pooja’s adoption truth.

Rohit doesn’t want his family to know about Pari’s mistake. He asks Tapasya to get out. Sonakshi doesn’t care for Tapasya’s threatening. She thanks Suman and Pari for coming on time. She asks Pari why is she looking upset and guilty. Pari gets speechless. The family meets Pooja. Rohit scolds Pooja for not valuing their love and trying to end her life. He tells her that suicide can never be a solution. They don’t want Pooja to attempt suicide again. Rohit puts sense in her mind. Pooja sees her entire family. Pooja connects to Sonakshi.

Nishi reaches them. She breaks down seeing Pooja’s state. She warns Sonakshi to make her away from Pooja. She holds Sonakshi and her family responsible for Pooja’s suicide attempt. Pooja behaves strange with her parents. She doesn’t want to forget about the adoption truth. Pooja feels alienated. She distances herself which comes as another huge shocker for the Sippys. Will Sonakshi pacify Pooja’s anger and connect her with Sippys again? Keep reading.

Reviewed Rating for this particular episode: 5/5 For Only Ronakshi
This rating is solely based on the opinion of the writer. You may post your take on the show in the comment section below.