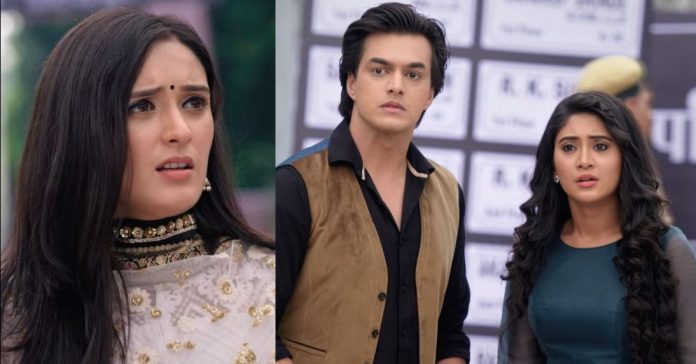 Yeh Rishta Unexpected Vedika hits Kaira new beginning Kartik and Naira have a romantic moment when they revive their love vows. He tells her that he will never do anything wrong that she gets away from him. He doesn’t want to part ways again. Naira also promises that she will not go away by reacting impulsively. She wants to live with them and also compensate for their lost years. He feels he was the reason for their life’s major loss of happiness. He wants to make sure that he keeps her very happy. He tells that this time he will grow their relation with much faith. Naira tells him that she wants him to lock his foot prints with hers, so that they always appear in the same frame.

She tells that their love, faith and rights are equal. She wants Kartik to know her immense love. They have a sweet moment. Dadi witnesses their moment. She doesn’t feel happy seeing their union. Instead, a new fear develops in her that Kartik’s happiness is short-lived. He doesn’t know the reason for it, since Naira is with Kartik. She thinks Vedika could be the reason for her tensions. Suwarna asks Dadi about her thoughts.

Dadi tells her that she feels Kartik will lose his happiness. Suwarna asks her to believe the reality, everything is falling into love. She is sure that Vedika is moving on. Vedika is much upset that Kartik and Naira are together, because of her giving up on her relation. She thinks she has sacrificed her happiness. She gets in a dilemma that she has done wrong to unite Kaira. She loves Kartik a lot. She can’t forget him.

She sinks in sorrow. Kartik and Naira visit the temple together. They make prayers of their togetherness and marriage. Vedika also visits the temple. When she finds them together, she hides and cries. Naira tells Kartik that she has really seen Vedika around. Kartik wants her to forget about Vedika and think about Kairav. Vedika thinks Kartik least cares for her.

She analyzes her decision again. Goenkas learn that Vansh’s grandfather is really critical and wants to meet him in his final time. They ask Gayu to take Vansh to his family. Samarth is much upset to think of Gayu’s old relation. He taunts her and turns her upset. Naira senses the tensions between Samarth and Gayu. Gayu takes Vansh with her. She feels guilty because of Samarth. Naira wants to discuss about Gayu with Samarth. Naira tells Kartik that she is going to Singhanias to live there until marriage. He doesn’t want her to go. He tells that he will miss her badly. She asks him to consider her emotions also.

Naksh picks up Naira and Kairav to take them home. Kairav promises to come back soon. He wants to get Naira’s baraat for Kartik. Kartik is happy that Kairav is siding with Naira. Dadi is troubled by her fears. Goenkas reach the court to nullify Kartik and Vedika’s marriage. They want Vedika to sign the formal papers and resolve the marriage.

Lawyer tells Goenkas that divorce may take up to six months if they take the process ahead slowly. Goenkas want Vedika to be on time so that they don’t miss the hearing. Naira feels guilty to ruin Vedika’s marriage and happiness.

Kartik asks her not to blame him or herself, since he could never live with Vedika happily in the marriage. He tells her that his divorce with Vedika is destined. Manish wants the divorce to happen soon, so that Kartik and Naira get married. Lawyer assures to speed up the process. Vedika doesn’t come in time. Lawyer tells them that they have to take the next date. Vedika makes a shocking loud entry. She gives excuses for getting late. Everyone gets convinced. Dadi suspects Vedika’s intentions. She knows that Vedika loves Kartik.

She thinks Vedika’s love is making her change the decision. Dadi regrets the situation. Kairav wants the marriage to happen soon. He is in hurry to see the marriage. The family laughs seeing his excitement. Naira breaks the news that marriage can’t happen so soon. Kartik and Naira have cute moments while Kairav plans their marriage.