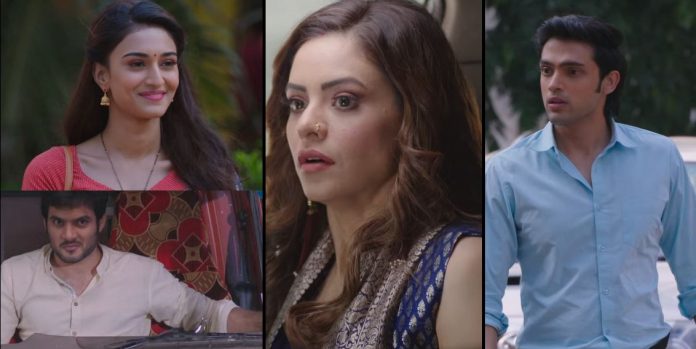 Kasauti Today Komolika Ronit strike Anurag Prerna Moloy reaches home and receives a shock on knowing about the theft case. He learns that Mohini and Nivedita believed Sonalika and blamed Sharma family. He tells her that he knows Prerna well, since he had seen her since childhood, she can never do such a thing. He asks Mohini how could she forget his good terms with Rajesh and insult Veena this way. He didn’t expect his family to slip in the old days and humiliate Sharma family. He gets angry on Nivedita for following Mohini’s foot steps blindly. He tells that he is ashamed of her. He thanks Anupam for informing him.

Nivedita tells him that she believes Sonalika when the latter accused Prerna. She regrets to not confirm about the theft and directly accuse Prerna. Mohini doesn’t have any regret. She is sure that the police will recover the stolen money from Sharma house. Moloy doesn’t think so. He asks them not to believe Sonalika. Anurag, Prerna, Sonalika arrive home with the police. Anurag reveals that he didn’t get the money bag in Sharma house. He asks Inspector to check his study room as well. He doesn’t feel ashamed to get his own house checked. He knows Prerna is innocent. Police recovers the money from the study room.

Inspector asks Anurag to check the amount. Komolika can’t believe this. Prerna shocks her. She tells Komolika that she knew her plan well, since she is aware of her impulsive personality. She tells that she had seen Komolika trying to make duplicate key for her evil motives. She understood Komolika’s intentions. She reveals that she had swapped the bags to be ahead of her plans. She asks Komolika if he regrets for her stupidity and waste efforts.

Komolika gets angered when Moloy asks her to apologize to Prerna. Moloy and Anurag insist her to apologize. Komolika apologizes to Prerna. She feels humiliated. Anurag also apologizes for reaching late and not handling matter well. Moloy tells that he wasn’t at home, else this would have not happened. Anurag finds Komolika upset and tries to make her realize the mistake. She throws her clutch. She worries when the pictures fall out.

She stops him from seeing the pictures by apologizing to him. He tells her that he will not forgive her next time if she hurts Prerna this way. He tells that he is protective about Prerna and her coming baby. He warns her, which angers her more. Komolika gets mad in anger. She doesn’t want to spare Prerna. She meets Ronit. She shares her insult chapter wit her. He tells her that he can kill Prerna.

She wants to give a painful life to Prerna than death by snatching her baby. She tells him that Prerna is pregnant and the baby is connecting Anurag and Prerna. She wants to kill the baby and break down Prerna. Ronit promises to kill Prerna’s baby. He makes a wicked plan. Mohini apologizes to Anurag for upsetting him. Anurag gives an off to Prerna. Prerna tells Shivani that she knew Komolika’s evil. She is sure to defeat Komolika. Komolika plans to send Prerna to meet Anurag. Ronit and his goon execute the accident to kill Prerna’s baby. Will Prerna lose her baby? Will Anurag know Komolika’s truth? Keep reading.