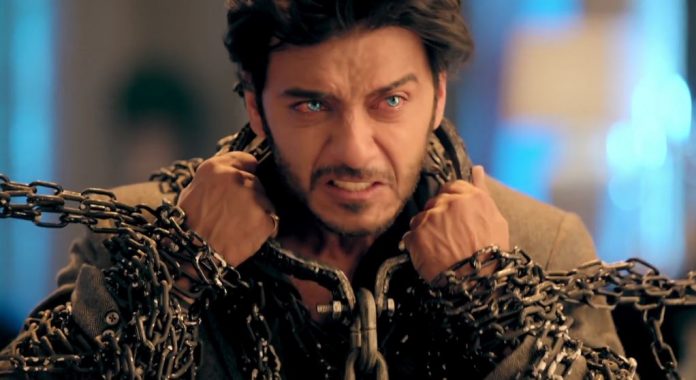 Star Plus Most awaited twist Jadu Hai Jinn Ka Today Aman gets shattered on seeing his family getting murdered by Sifriti Jinn right in front of his eyes. The sight gets too shocking for him. He can’t imagine to lose them. He wants the Jinn to spare his family. He is ready to give his life for his family. The Jinn doesn’t forget his revenge and takes down everyone one by one. He tells Aman that he will be killing his family and also vanishing their souls so that they don’t revive ever on Aman’s call as well. Aman wants him to stop and spare them. The Jinn mercilessly kills even the youngest member of Aman’s family, Chotu. Aman cries with deep sorrow.

Jinn gives him little time to obey his instructions and come to the red moon in the jungle so that Aman loses his life. He also stabs Baazigar to end every help source for Aman. It can’t get worse than this. Aman too wants revenge on him. Aman is ready to go to the Jinn and fight him. He wants to kill the Jinn. A good twist surprises in the form of a flashback, where good-hearted Tabeezi is seen meeting Dadi/Anjum despite the hatred received from Parveen. Tabeezi takes the big step to save Aman’s family.

She gives a magical string to Dadi to secure the lives of the family. She tells that the string will help them trick the Jinn by creating their fake bodily shadows, while their real bodies and souls will stay protected in the clean place of clouds. Dadi is indebted to Tabeezi for her great help. She blindly believes Tabeezi, who always proved herself as the family’s well wisher. Dadi and family stay safe, resting their bodies on the clouds. They all descend back to the earth, to their home on right time after the Jinn leaves. Jinn plans to kill their souls. He realizes their cheat.

He laughs on their silly efforts to get saved from the immortal evil. He wants to tackle them again once he finishes Aman’s chapter. He is sure that he will get Aman towards the red moon and kill him. Aman desperately rushes on the Jinn’s provocation. Dadi stops Aman from going out of the house, since that would invite danger for him. Aman gets overjoyed on finding his family back home. He learns about Tabeezi’s great help and feels indebted. Dadi and Tabeezi’s timely act had saved their lives.

Aman tells Dadi that he had witnessed the worst moment of his life and would never like to imagine that catastrophe again. He wants to eradicate the fear for once and all. He tells her that he will fight the Jinn and conquer. Dadi doesn’t want him to face the red moon of evil. She fears of losing Aman. Aman doesn’t know that his mistake to face the red moon will cost him Roshni’s life. Roshni rushes by every possible way to reach Aman and save his life. She will be dying to save Aman. It will be interesting to see if Tabeezi revives Roshni after Jinn-destined death as well.