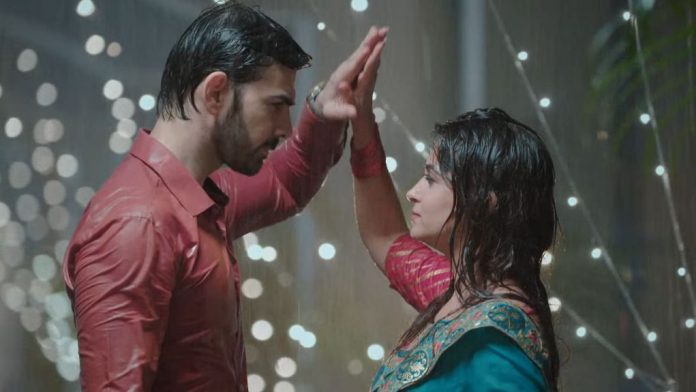 Kahaan Hum Starplus Revelation time for Sonakshi Sonakshi falls nervous while shooting the romantic scene with Sumit. Rani is convinced with Sonakshi to play the duplicate. Rohit rushes to meet Nishi and Yash. He tells them about Rani’s entry in their lives. He tells that he has threatened Rani to instill fear and keep her away from the family. Nishi asks him to consider her request and share the truth with Sonakshi to keep her on their side. Rohit doesn’t think its needed. Netra finds Sonakshi’s discomfort. She asks Sonakshi to prepare soon. Sonakshi makes excuses to avoid the shoot. Sumit understands her problem well. He tells Sonakshi that they are co-actors, but friends first.

He asks her not to feel uncomfortable and just take it as work. She shares her problem about Sippys, who would not like to watch the romantic scenes in her show. She tells that Naren opposes her profession often. Sumit understands it well. He asks her not to care for Sippys when Rohit is on her side. He tells her that he will try to support her in the scenes and manage the intimate shots with the duplicate. Sonakshi is thankful to him. She fails to project right emotions. The chemistry falls flat. This troubles the set crew. The multiple takes don’t help either. Sonakshi is asked to bring good chemistry with Sumit.

Netra calls Rohit to come on the set and boost Sonakshi’s confidence. Rohit informs Veena that Sonakshi isn’t able to confidently shoot the romantic scenes. He wants to go to Sonakshi and support her. Veena asks him to clear the matter with Naren. Rohit doesn’t think its necessary. He tells her that Naren has no right to judge Sonakshi by her profession. He wants to give independence to her. Veena tells him that Naren will object to the romantic scenes. She tells that Naren wants Sonakshi to quit her job. Rohit doesn’t listen. He condemns their low thinking. He reaches Sonakshi and finds her giving bad shots.

He asks her to just emote and show some good chemistry. Sonakshi learns that Netra called him. Sumit asks Rohit to just explain Sonakshi so that they can finish the scene well. Rohit asks Sonakshi not to think about the family. Rohit gets Pooja with him. Pooja surprises Sonakshi. She is excited to watch the shoot. Rohit asks Sonakshi to imagine him and give the best shot. Sonakshi takes his advice. He tells her that he just wants to hear her praises. He encourages Sonakshi nicely. He proves to be the best husband. Sonakshi relaxes and imagines him to perform with Sumit. Sonakshi gets applauded for her wonderful performance.

Rani gets hiding from Rohit. She rushes to finish her work and leave from the set. Rohit takes Pooja home. Sonakshi finds Rani on the way and offers help. She gets Rani with her and tries to know about her family. Rani tells about her daughter, who is living away from her. Sonakshi sympathizes with her. She gets Rani home and asks driver to drop Rani to her place. Rani gets lucky to see Pooja at Sippy mansion. She thinks fate has brought her to Pooja. She decides to meet Pooja and disclose that she is her real mum. She wants to tell the truth and take Pooja with her. She remembers Rohit’s anger and still wants to take a chance.

Pooja doesn’t see Rani. Rohit arrives at the same time and stops Rani from going to Pooja. He reminds her that Pooja is now a Sippy. He wants to not risk Pooja’s future. He warns her against meeting Sonakshi and Pooja. Rani tells him that she works with Sonakshi and came along with her. He can’t believe that she is in contact with Sonakshi. He asks her to get away and not meet Pooja. He threatens to get her arrested. He gets rid of Rani.

He goes to confront Sonakshi for helping strangers. Rani gets disturbed. Rani wants her daughter back from Sippys. Rohit scolds Sonakshi for trusting strangers. Sonakshi questions him. She finds his behavior weird. She gets to learn about Rani, who is related to Pooja. She meets Rani to question her about Pooja. The revelation will soon come Sonakshi’s way. Sonakshi will learn that Rani is Pooja’s mother. What will Sonakshi do then? Keep reading.