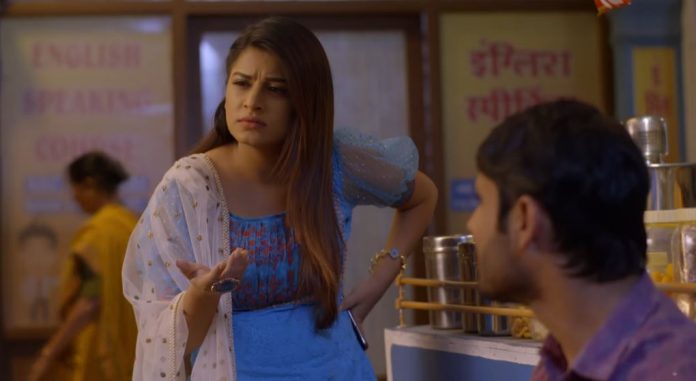 Nimki Vidhayak New entry Hilarious Mintu Nimki Dadi calls up Nimki to inform about Anaro. She asks Nimki to come home if she wants to see Anaro alive. Nimki wants to go to Anaro. Sweety asks Nimki to be with the family, and not think of Anaro. Nimki reminds that Anaro is also family. Sweety tells that its not good to burden Mintu’s life with the responsibility of Anaro. She asks Nimki to arrange a nurse for Anaro and make her stay at some nursing home. Mahua asks Nimki to go if she has any important work. Nimki reaches Mintu’s house. She finds Dadi angered. Dadi tells her that Anaro is mad and may kill anyone. Mintu tells that the people were making fun of her and enraged Anaro.

He doesn’t think Anaro was at any fault. Nimki understands Dadi’s concern. She wants Rekha to come soon and take Anaro with her. Rekha makes an entry. Dadi wants Nimki to take Anaro right away. Mintu argues with her. Dadi feels Anaro is snatching him. She reminds how they stayed happy before. Mintu explains her that Nimki saved both of them and now he has to help Nimki by serving Anaro. He calms down Dadi. Rekha meets Nimki at Mintu’s place. Shankar tells Ganga about Nimki’s stand for Mahua. He tells that Nimki had no doubt on Parag.

Ganga doesn’t want Parag to fall into any mess. She tells that they should prove that they are supporting women empowerment. Parag starts liking Nimki. He praises her. Rekha worries seeing Mintu. Nimki introduces Mintu to her. Rekha doesn’t tell about Babbu to them. Ganga asks Parag to call Nimki and show fake concern for Mahua. She tells him that its fun to win trust and break it. Parag calls Nimki and asks about Mahua. Nimki thanks him for his concern. She tells him that she knows handling her enemies. She goes to have tea with Mintu.

Shankar tells Ganga about the person she summoned. Anaro takes Nimki and Mintu together to the doctor. She wants them to have a child. Nimki gets a shock to know her insistence for a grandchild. Nimki tells the doctor that Nimki has a problem to conceive. Nimki clears out the confusion. She tells that she has no such problem. Anaro tells that her son’s marriage happened long time back and still he is childless. Mintu gets in tension.

Nimki handles the matter well. She tells that maybe her son has a problem, why is women always blamed. She asks Anaro to get her son treated. Anaro defends her son. Mintu asks them to stop nonsense, he doesn’t want to have a child. Doctor asks Anaro not to always doubt on her Bahu, maybe her son has a problem to father a child. Mintu gets worried.