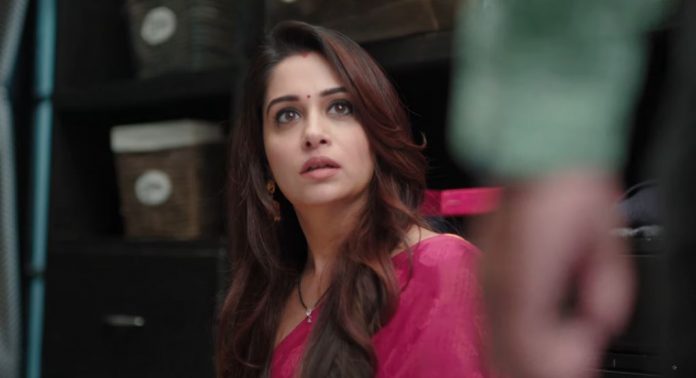 Kahaan Hum Starplus Coming Shocker Huge twists Rohit is angry on Sonakshi for trusting strangers and offering help. He doesn’t want her to meet Rani. Sonakshi clears her stand that she has helped Rani who played her duplicate in the show. She tells him that she couldn’t leave Rani alone on the roads finding mode of transport at night when there is already a transport strike. She tells Rohit that she is a responsible citizen and wants to help as much as she can. Rohit apologizes to her. He expresses his concern. He lies to her about knowing Rani beforehand. He realizes that she is suffering from fever. He checks her pulse and recalls their first meet. He jokes on their first meet.

He tells her that he will always remember the moment which was magical for him. He calls her lucky to get a smart and handsome guy like him. She tells him that he is also lucky to marry the most famous actress. She tells that she has many fans who can do anything for her. He compares her with another famous actress, Divyanka. He teases her by praising Divyanka a lot. Sonakshi feels bad by his comparison. She doesn’t want him to see anyone except her. She asks him if he is Divyanka’s fan. He asks her to invite Divyanka for dinner. She tells him that she knows many people in TV industry, she may call everyone in their due reception.

She tells about Divyanka’s husband. He likes to tease her a lot. He draws her jealous. Shankar passes Rani’s bag to Vimmi. The bag reaches Sonakshi. Sonakshi gets upset on Rohit and Vimmi for praising another actress. Rohit accepts that he just loves Sonakshi, and can’t see anyone else. He tells her that he loves his mom the most. He tells that Sonakshi will always be close to his heart, no actress can take her place.

Meanwhile, Veena is worried on knowing about Sonakshi’s romantic sequence going to air on the next day. She doesn’t want Naren to watch it and make a new issue. Pooja sings praises about Sonakshi’s amazing looks and acting skills. Pooja tells them that the entire family will watch Sonakshi’s show. Veena doesn’t want this to happen. She goes to meet Suman with an odd request.

Suman wants to send Pari for the tv show auditions. She doesn’t want Pari to waste more time while waiting for a film offer. Sonakshi tells Rohit that she will finish dubbing being at home. Rohit goes to the hospital and informs Nishi about Rani meeting Sonakshi. Nishi thinks if Rani told the truth to Sonakshi. He doesn’t think Sonakshi knew anything by now. Sonakshi gets her script from her bag. She finds Rani’s bag.

She wants Shankar to return it to Rani. She finds Pooja’s birth certificate, adoption papers and pictures. She reads the truth that Rani is Pooja’s biological papers. She gets moved and wants to confirm the truth. She calls Rohit to ask him the truth. Rohit also wants to talk to her. He gets busy in tackling a problem at the hospital. Sonakshi finds Rani’s address from Netra. She wants to meet Rani and confront her. Later on, Veena tells Suman that they have to talk to Netra and stop the romantic scene episode from airing, so that Naren doesn’t face the society taunts.

Suman doesn’t understand why Veena is finding Sonakshi’s work so bad, when Rohit is being so encouraging and supportive. She wants Veena and Naren to understand Sonakshi’s work and respect it. She doesn’t want them to risk Sonakshi’s career. Veena praises Naren’s job when Suman compares Naren and Sonakshi’s professions. Suman feels bad that Veena is supporting Naren’s backward thinking. Veena and Suman have a long argument. Suman wants to support her daughter’s career. Sonakshi takes the efforts to meet Rani. She wants to hear just the truth.

When Rani refuses to answer, Sonakshi threatens of calling the police. Rani gets angered that Rohit, Nishi and Yash also threatened her of police. She reveals the truth that she is Pooja’s real mother. Sonakshi comes across the unexpected stunning truth.