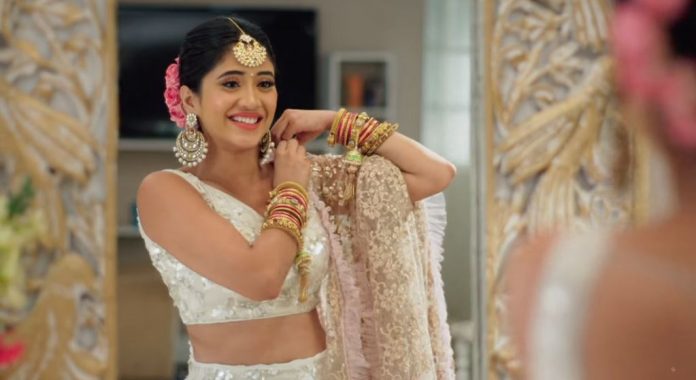 Yeh Rishta Starplus Sangeet Naira goes missing The Goenkas give a chance to Kartik to meet Naira and plan a surprise for her. They make an outing plan just to leave Kartik and Naira alone at home. Manish wishes Kartik all the best. He wants his son to be happy. Kartik is thankful to his understanding family. He awaits Naira with much love. Vedika comes between the special moment to ruin it. Kartik isn’t aware of Vedika’s coming and expresses his love for Naira. He then realizes that its Vedika in Naira’s place. His plan fails badly. He feels sorry to Naira and Vedika as well. He didn’t wish to hurt them. Vedika feels awkward that she is coming between his romance plans.

She didn’t wish to hinder. Kartik tells Naira that he didn’t know about Vedika. Naira doesn’t want his clarification. Naira tells him that Vedika would be hurt. She tries to involve Vedika in arrangements and make her normal. Vedika sheds tears and hides. Kartik and Naira don’t want her to lose her happiness. Goenkas return home. Dadi tells Kartik that she had prayed for Naira and his happy marital life. She wants to make sure that they stay happy and together. Kartik and Naira obey Dadi like always. They fulfill some rituals for Dadi’s satisfaction.

They aren’t scared of Vedika’s presence, like Dadi feels. Kartik and Naira decide their Sangeet function by challenging each other. They support their families. They make good teams and want to see the clear winner in the Sangeet. Vedika informs them about getting a job in Naira’s dance academy. Naira clarifies that she has hired Vedika since the job profile suits her. Everyone finds the decision right, except Dadi. Dadi doesn’t want Vedika to get more involved in their lives. She thinks Naira is making a mistake. Kartik and Naira have a cute moment while they practice for Sangeet.

Dadi gets Akshara’s bridal lahenga for Naira and makes her emotional. She permits Naira to wear it in her marriage. Naira cherishes Akshara’s memories. She keeps the lahenga in the temple area for the puja. She teaches the dance steps to the family. Vedika realizes everyone loves Naira a lot. She feels sad. Kairav and Vansh play and unknowingly drop the lamp near the lahenga. Vedika finds the lahenga burning and tries to save it. Dadi turns raging when she sees Vedika with the lahenga. Kartik and Naira also rush with the family. Dadi misunderstands Vedika and yells at her intentional mistake. Her trust on Vedika gets breaking.

Vedika gets silent. She feels she has lost Dadi’s love as well. Dadi was feeling guilty about Vedika until now. She doesn’t want Vedika to ruin Kartik’s happiness and dreams. Kairav and Vansh clear the misunderstanding and accept their mistake. They apologize to Vedika. Kartik and Naira try to cheer up the family. Naira apologizes to Vedika. She wants to forget the incident. Dadi feels she did wrong to suspect Vedika. She tells Naira that she will bring the best lahenga for her. Kartik also cheers up Naira. They both have cute moments and fun. They promise to always be together. Kairav falls down the chair and gets hurt. Vedika witnesses this.

Kartik and Naira get worried for Kairav. They have an argument. Kairav wants them to fight in the dance competition. He wants them to be united. Kartik and Naira happily get ready for Sangeet. Naira learns about a problem at her academy. Vedika informs her the matter. Vedika tells her that she will go to handle the matter. Naira wants to take charge. Naira and Vedika face hurdles while they reach the dance academy. Vedika gets trapped inside the academy.

She stops Naira from going to the Sangeet by seeking help. Naira gets worried for Vedika. She wanted to be home on time. Kartik and the families worry for Naira’s absence. Naira goes missing from the home. The family isn’t aware of her trip with Vedika. Is Vedika really playing evil to separate Kartik and Naira? Keep reading.

Reviewed Rating for this particular episode: 2/5 LOOPED
This rating is solely based on the opinion of the writer. You may post your take on the show in the comment section below.