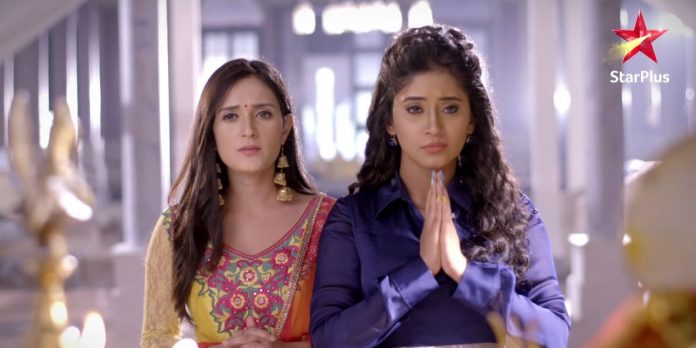 YRKKH Shocking Starplus Promo Naira Vedika unexpected Vedika learns that Kartik and Naira’s marriage is getting delayed because of the divorce proceedings. She thinks its a sign from fate that she shouldn’t divorce Kartik. She decides to not reach to the court or stop Kartik from reaching the court to complete the divorce formalities. Vedika wants her rights on her husband and in-laws again. She doesn’t like the sight of everyone loving Naira and forgetting her completely. Their family’s biased behavior makes her evil-minded. Vedika gets clear of her confusion. She decides to separate Kaira again.

Dadi suspects Vedika’s intentions. Naira falls down the stairs when she arrives for her Mehendi ceremony. Kartik manages to save her in time. Dadi gets more worried when she learns that Vedika is responsible for Naira’s accident. Dadi fears to think of the worse possibility. She finds out that Vedika still wants Kartik. Dadi’s prediction turns true. Vedika throws an open challenge to Naira by refusing to leave her husband. She tells Naira that none can snatch Kartik from her. Naira prays for Vedika, who would be facing her wrath now. Naira learns Vedika’s plotting against her.

She gets deeply hurt. Naira tells that Vedika has seen her care and respect, but now she shall see her anger. Vedika feels Naira can never get Kartik now. Naira knows Kartik will always be of her. She accepts Vedika’s challenge. Kartik wanted to free Vedika from the loveless marriage so that she could move on. Vedika wants to cage him and end his happiness. Naira will prove that she is still Kartik’s legal wife and tackle Vedika. A war begins between them to win Kartik.

Mintu fills sindoor in Nimki’s hairline on her saying. Dadi scolds him for his mad step. Mintu tells her that Nimki convinced him for doing this. He explains that Nimki told him that its fake sindoor moment, it doesn’t matter to her. Dadi tells him that Nimki knows the value of sindoor, which is part of her past. She knows that Nimki would be affected by it. Nimki tries to wipe off the sindoor. Anaro sees this and hits on her head. She scolds her a lot for risking Babbu Singh’s life. Mintu defends Nimki. He tells Anaro that Nimki is allergy to the sindoor and he had asked her to wipe it off.

He calms down Anaro’s anger. Dadi is worried seeing the happenings. Nahar Singh is desperate to meet Nimki. Tunne thinks Nahar isn’t ready to leave. He asks Nahar to get the things repaired if he really cares for Nimki. Nahar agrees to him. Dadi tells that Anaro is getting dangerous. Mintu calls Anaro as his mum. Dadi scolds him for getting related to Anaro. Mintu is worried that Anaro can harm Dadi. Nimki asks him not to worry, she will never harm anyone else. Dadi goes to hide Mintu and his mum’s picture. Mintu picks the pictures. He tells that he had seen the picture already.

She is relieved that he didn’t see Ganga’s face in the picture. He asks her to tell about his mum. When she lies, he demands to know the truth. He threatens to go away. She slaps him and calls him a coward like his mum. Mahua calls Nimki, but fails to get through. Nahar repairs the shower tap. Tunne manages to send him away.