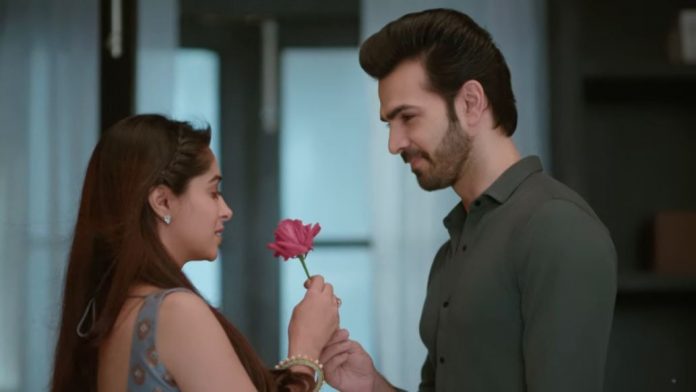 Kahaan Hum Starplus Party blast Huge twists coming Sonakshi is much worried when Naren gives her an ultimatum. He tells her that he doesn’t find her professional not dignified enough. He tells that she shouldn’t continue her acting career if she wants to keep terms with her. He tells that she is aware of Tanya, Nishi and Pooja’s dignified professions. He wants Sonakshi to keep up the decency in her work. He asks her to image his stand when he learnt about his Bahu romancing someone in a drama just for the sake of earning money. He reprimands her.

He doesn’t want Sonakshi to bring disgrace for Sippys. He asks her to not clarify things since he isn’t ready to accept her profession. He tells her that he won’t talk to her until she comes up with a decision. He asks her not to spoil Nishi and Yash’s anniversary party by any drama. He wants to avoid her for the better. She gets much upset and thinks if every Bahu gets insulted in her in-laws about her work. She wants to know why Naren finds her job wrong when she is so hardworking.

She wants Naren to value her work. She wants to balance her life. She meets Veena and finds herself at fault. Veena consoles her. She asks Sonakshi to talk to Rohit. She wants Sonakshi to take time in understanding the family members. Rohan invites Pari in the party. Tanya tracks him and doesn’t find anything suspicious. She wants to keep a watch on him.

Pari challenges Rohan to kiss her in the party. He accepts the challenge and isn’t scared to get caught. Veena doesn’t want Sonakshi to stay sad. Sonakshi and Veena permit Pooja to go on shopping with Rani. Nishi loses her cool when she learns that Pooja and Rani went out together. She doesn’t want Pooja to fall in danger. She tells Sonakshi that Pooja is in danger, Rani can harm her. Sonakshi gets aback on knowing this. Pooja happens to return home and learns the ugly allegation on Rani. She wants to know the reason behind Nishi’s allegation. Yash asks Nishi not to hide the matter further.

Nishi blames Sonakshi for every mess. She reveals that Rani is an alcoholic who can do any crime to get money for her addiction. Pooja can’t believe this. She challenges Nishi to prove herself. Nishi tells her that she will be exposing Rani’s addiction to her in the party tonight. Pooja prays that Nishi is proved wrong. Sonakshi wonders this was the reason that Rohit hindered Rani from meeting Pooja. Nishi tells Pooja that she won’t interfere in her life again if Rani doesn’t drink in the party. She also tells that Rani will have to leave the house if she drinks alcohol. Pooja accepts the condition being sure that Rani will not let her down.

Pooja trusts Rani, but has fear within. Veena wants to talk to Naren about forgiving Sonakshi. Naren doesn’t listen to her. Sonakshi tells Pooja that Rani will have to leave the house if she is at fault. Pooja prepares herself for the outcome. Sonakshi badly misses Rohit and imagines him around. When Rohit happens to come home, she doesn’t see him. Rohit finds her daydreaming and gets into a moment with her.

Rohit and Sonakshi drag their fight because of their ego issues. Rohit gets hurt that she isn’t breaking her silence. He vents out his frustration on Sonakshi and his marriage in the party by giving a speech on his couple’s big ego. He accepts that he kept his ego higher than love and suffered. Sonakshi also wants to talk to him and end their fight.

Nishi and Pooja test Rani’s addiction by passing a drink to her. Rohit turns surprising to Sippys. Suman and a guest get into a heated argument in the anniversary party. Suman defends her daughter’s career. Rohit tries to talk to Sonakshi and apologize to her. He realizes his mistake. He comes ahead to defend Sonakshi when the guests talk low about Sonakshi’s romance scene.

Veena gets speechless and ashamed, also fearing about Naren’s reaction. Naren knew about the uncalled drama because of his actress Bahu. Sonakshi answers the man nicely and keeps up her image. Suman and Rohit become her moral support. When the man gets more humiliating Sonakshi, Suman gets mad and hurts the person. Naren stops Suman from hurting his friend. Rohit apologizes to everyone. He takes a surprising stand for his wife’s profession and ends all his complains. Sonakshi feels proud of Rohit after the huge drama.

Reviewed Rating for this particular episode: 5/5 Kudos to Ronakshi
This rating is solely based on the opinion of the writer. You may post your take on the show in the comment section below.