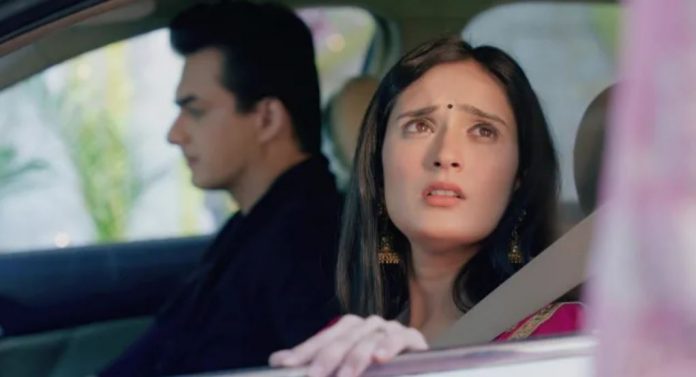 YRKKH Nimki Muskaan Upcoming Spoilers Today Kartik takes Vedika to the Dargah when she keeps her wish before going to the court for the divorce. Kartik sends Vedika to pray there. He waits for her. She doesn’t return to him. He sees the time running and goes to find her. Vedika sees Kartik entering the Dargah. She hides from him to waste more time. She wants to avoid the divorce hearing. Vedika is in dilemma over correcting her mistake. Naira reaches there to meet Kartik and give the divorce papers. Naira looks for Kartik. She finally sees him and calls him out. Kartik and Naira run to each other and suddenly the pillar collapses. They hug and protect each other.

They both get under the debris. The shocking incident shocks Vedika the most. Vedika asks the people to rescue Kartik and Naira. Vedika is envious of Naira. She doesn’t want to give divorce to Kartik. She didn’t wish Naira to get hurt. Kartik stays fine, but Naira faints down. Kartik rushes Naira to the hospital, instead going to the court with Vedika. Vedika manages to avoid the divorce hearing because of the sudden accident.

Nimki Vidhayak:
Nimki and Ganga have become against. They play a game. Ganga tells her that game can change anytime. She asks Nimki not to break her trust this time, else she won’t be able to save her. Nimki tells her that she has committed and won’t break her promise. Parag witnesses their meeting. Ganga threatens her indirectly. She taunts about Nimki’s old move. Nimki has become a Vidhayak now. She proves herself to be a clever competitor. Mahua makes a video call to Nimki and introduces her friends. Nimki is glad to see her happy.

Mahua and the girls get kidnapped. Mahua falls in grave danger. She gets involved in human trafficking. Nimki goes to meet Shukla and ask for a favor for helping him. She tells him that she didn’t ask him for ministry. He asks her to join Ganga’s party. Shukla asks her to back stab Ganga and support his party.

Muskaan:
Ronak meets Muskaan at the school to convince her to live with him at home. Muskaan tells him that she can’t snatch Nisha’s happy family. Ronak finds Nisha insecure. Same way, Nisha is also insecure of Roshni, who is fearless. Muskaan wants Ronak to give mental security to Nisha and Khushi. Ronak takes Roshni’s side knowing she has struggled a lot in her life. He wants Khushi to give some time to Roshni. He wants Roshni to get his love. He doesn’t want Khushi to turn upset. He is troubled while keeping both his daughters happy. He doesn’t think Muskaan’s decision is right. He loves Muskaan a lot and wants her to come back.