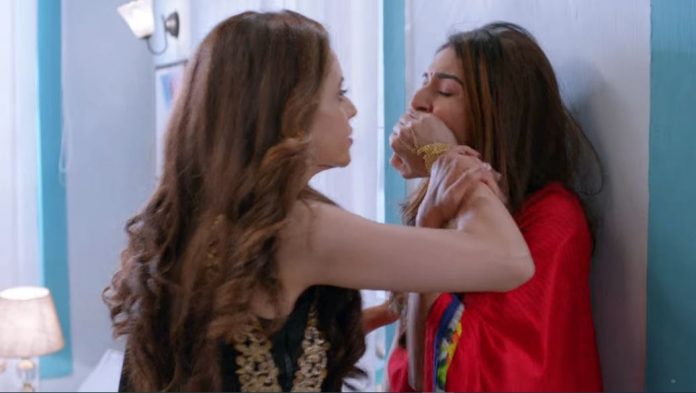 Kasautii Zindagi Ki Starplus Upcoming Twists today Komolika tries to kill Prerna’s baby by dropping some marbles on the stairs. Prerna manages to get saved. Komolika tries to hurt her. Prerna warns her that she will not tolerate the wrong and may hurt her too. Komolika doesn’t think Prerna has any courage. She takes Prerna’s warning lightly. She the pours the oil on the staircase to harm Prerna. Prerna goes to Anurag with the medicinal herbal juice. She asks him to have it and get a relief from his headache. Anurag tries to get saved from tasting the bitter liquid. Prerna insists him. They get into a cute moment. She convinces him to drink the herbal juice.

Komolika is sure that Prerna will suffer a miscarriage when she falls down the stairs. She engages Nivedita. She doesn’t think Anurag or Mohini will come there at that time. She awaits Prerna. Mohini comes towards the stairs and slips by the oily floor. She falls down the stairs and gets too hurt. This shocks her family. Komolika doesn’t regret since she thinks even Mohini deserves this pain. Anurag and his family rush Mohini to the hospital. Komolika fakes her concern for Mohini. Doctor tells the Basus that Mohini is fine now. Prerna understands that Komolika had planned this accident to harm her. She wants to scold Komolika.

She takes Komolika by an excuse. Komolika doesn’t think she did anything wrong. She reminds Prerna that Mohini isn’t deserving of anything good. She asks Prerna not to worry for Mohini and stay happy. She tells that she liked to watch Mohini’s fall. Prerna suddenly gets stomach ache when Komolika tries to harm her. Komolika gets bitterly rude and tells that her baby will die in her womb. She doesn’t let Prerna go to the doctor. She stops Prerna and hurts her further. Prerna manages to run away. She takes help from the doctor.

Anurag finds Prerna in pain and takes her for the aid. Anurag and Prerna learn about the pregnancy complications. Doctor asks Prerna not to take stress since it will harm her baby. Doctor tells her that she has to cut down the stress. The nurse sends Anurag to get medicines for Prerna. He doesn’t want Prerna to take any sort of stress. He asks her not to do his job and just rest well. Komolika makes a plan and sends her aide to provoke Anurag. Her aide takes a doctor’s disguise and gossips about Anurag and Prerna’s affair. He raises a question on Prerna’s character. Anurag loses his cool and bashes him up. Komolika stops the fight.

He wants to show her trust on Anurag. She misleads him emotionally. She tells him that she ignores everything since she trusts him a lot. She tells him that people will always speak bad of Prerna. She asks him to not put Prerna in more trouble by being with her all the time. She asks him to get a husband for Prerna, get her married for her financial security. He thinks she is right, since Prerna needs a support. He doesn’t want to cheat his wife Sonalika. Komolika wants Prerna to marry someone and get away from their lives.