Kundali Bhagyya Preeta love realization big twists Kareena insults Preeta. Shrishti is upset seeing Preeta’s sorrow. She tells Preeta that Karan and she would really unite some day. She gives hopes to Preeta. Preeta tells her that Karan was never of her. She tells her that if Mahira gets Karan’s mehendi, then she will accept the sign from the fate that she was never meant for Karan. Shrishti prays that Preeta gets Karan, who is actually made for her. She wishes that Preeran union. Rishabh solves Preeta’s problems. Sherlyn questions him about his intentions. She tells him that they can file a case on Sarla if she doesn’t serve them well. She tells that they can take revenge this way.

He tells that he doesn’t want this. She asks him to understand the chance. He asks her not to think of revenge and just enjoy the function. She wants an answer from him. He tells her that he will not answer her. She knows that he has a soft heart towards Aroras. She wants to make a plan to insult Aroras and also make Rishabh against her. Karan gets the mehendi for Mahira. Preeta gets hurt. Shrishti thinks Preeta is much upset since she has the right on the mehendi. She feels sorry for them. Rishabh too feels the same, since Karan isn’t understanding his mistake.

Sherlyn thinks Rishabh loved Preeta and couldn’t tell his feelings thinking his friendship will break, while Karan loved Preeta and failed to tell her because of his big ego. Karan takes mehendi for Mahira. The kids jam in and the mehendi gets spilled over Preeta’s hand. Preeta gets the sign that Karan is made for her. Rishabh and Shrishti just wanted this moment to happen. They get too happy. Sarla feels bad that Preeta is getting sorrow again. She knows Karan will never accept Preeta. Rakhi thinks of the fate sign. Preeta cries and runs away to her home. Sarla tells Janki that she didn’t wish her daughters to face all this.

She doesn’t want to tell anything to Preeta. She can feel Preeta’s sorrow and sentiments. She tells Janki that she prays a lot for Preeta, but Preeta still undergoes much sorrow. She can’t see Preeta with broken dreams. Preeta feels saddened thinking of Kareena’s words. Shrishti tells Preeta that Karan and Preeta are really made for each other, even then they hate and bring ego in between. She asks Preeta to accept her fate and fight for her marriage rights. She wants Preeta to take a stand.

Preeta tells Shrishti that mehendi got on her hands by mistake. Shrishti asks her to believe in fate and not deny her love. She motivates Preeta to claim her rights on Karan as his wife and stop his marriage with Mahira. She doesn’t want Preeta to have any doubt on her fate and feelings. Preeta finally accepts that she is meant to be with Karan. She gets encouraged by Shrishti. She promises to fight for Karan. 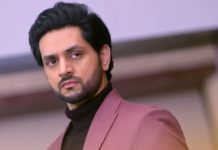 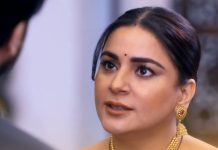