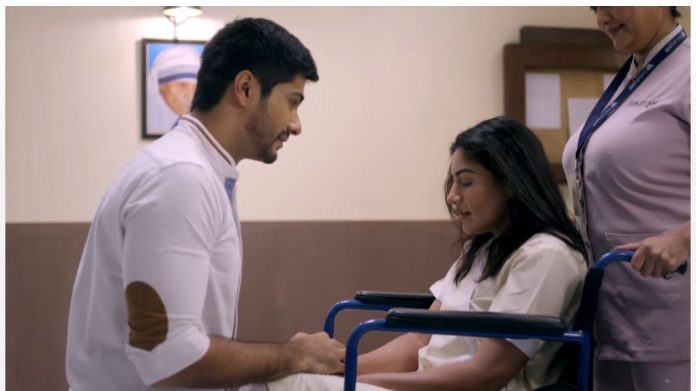 Sanjivani Starplus Sid Ishani battle Vardaan evil Sid gets panicking knowing Ishani is critical. He wants Ishani’s recovery some how. He pleads to Juhi to save her. Inspector thinks Sid is running away and blocks him. Sid tells him that he wants to be with Ishani until she gets treated. He pleads so much, but in vain. He wonders why isn’t the inspector showing any understanding when he can see the genuine problem. Sid gets arrested. He shouts to Ishani that he is with her and will come to her soon. Ishani gets restless on hearing about his arrest. She reacts impulsively. Juhi worries seeing her reports and rushes her to the OT. Sid wishes that Ishani gets fine.

He runs to her once again and assures that he will be back. Inspector takes Sid with them. Sid faces the questions from the media. Juhi finds Ishani’s condition puzzling. She tries to diagnose well. Reporters insult Sid with blames, but Sid doesn’t react. He is just worried for Ishani and thinks of her. Vardaan thinks why isn’t Sid getting hyper on his insult. He wants Shashank in the hospital soon so that Shashank can see Sid’s humiliation. Ishani disappears from the ICU. This shocks Juhi the most. Sid is ready to do anything just to go to Ishani.

He tells inspector that he will sign the confession letter and take the blame on himself, just to meet Ishani. He feels Ishani needs him. Inspector works for Vardaan. He is happy that Sid is falling into the trap. Ishani reaches there in time and stops Sid from making the mistake. She tells him that she has faith on him, she has come just to fight for him. She tells that she will not let injustice happen with him. He is more than happy just to see her fine. She faints due to weakness. He rushes her to the hospital.

Vardaan tries to hinder him, but Sid doesn’t listen to him. Sid learns that Ishani is out of danger now. He goes to meet her. He tells her that he has a good news, that Asha has annulled the marriage. He tells that they can now unite easily, just the way she wanted by giving a name to their relation. She tells him that she will find the proof of his innocence. She tells that Vardaan is behind this evil conspiracy. Sid wonders why was Vardaan ruining his career. She asks him to think of the incidents that happened with him.

Sid tells her that Asha told him about his dad’s connection with the matter. He tells that he has to find out his dad to know the matter well. Ishani and Sid get together to solve the mystery of Sid’s father. Ishani secretly sneaks into Vardaan’s cabin to find some proof. She gets some documents related to Sid. Ishani will soon find out that Sid is Shashank’s son. Ishani will become Sid’s big support when Vardaan conspires against Sid and Shashank.