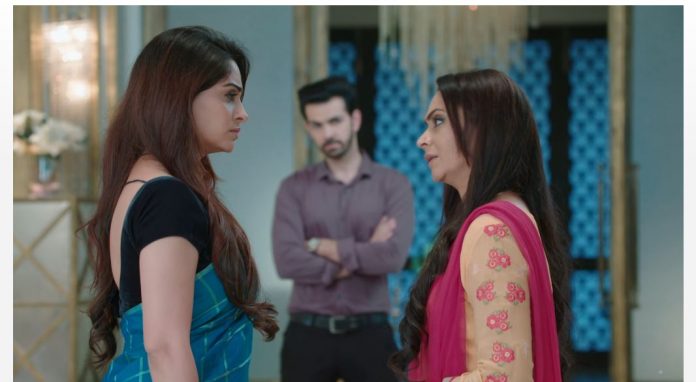 Kahaan Hum Starplus Sitara entry Rohit blackmail move Tanya checks the door which worries Pari. Pari gets saved when Rohan doesn’t come home at the time when Tanya is already there. Pari tries to mislead Tanya. Tanya still feels that Rohan has an affair. She asks Pari to help her in finding the girl. She swears to not spare the girl. She wants to clear all her doubts. Pari makes an excuse and calls Rohan to stop him right away. Rohan also gets alert of Tanya and rushes back to his office. Rohan and Pari want to be careful of Tanya. Sonakshi likes the Christmas tree decorations. She joins the family.

Nishi tells that Pooja enjoys doing the decorations. Pooja gets decked up to attend the friend’s party, for which Nishi didn’t permit her. She tells them that she is going in the party. Nishi asks Pooja why is she going. Rani supports Pooja and gives her freedom to do her wishful. She lectures Nishi for having faith on Pooja and letting her free. Nishi is protective of Pooja. Pooja tells that her decision is final, she will go some how. She doesn’t think she needs Nishi’s permission. Sonakshi witnesses the entire matter. She asks Pooja not to misbehave or go against Nishi, who has raised her into a mature individual.

She tells Rani that though Rani gave birth to Pooja, even then Nishi’s love is mighty. She scolds Rani for trying to make Pooja against Nishi. She tells that Nishi will always think right for Pooja. She asks Nishi to just shower love on her daughter, instead trying to decide for Pooja. Rani tries to justify her move. Sonakshi makes Pooja get some sense and value Nishi. She asks Pooja to convince Nishi with her reasoning to attend the party. She tells that Pooja can go in the party once she convinces Nishi. Pooja refuses to attend the party, just for Sonakshi’s sake. She gets upset. Sonakshi asks Rani not to interfere in Nishi’s matters.

She wants Rani to remember that Nishi is big hearted to let her stay in the house. She shows Rani her place. Rohit is much impressed with Sonakshi. Nishi is also thankful to Sonakshi. She feels Rani is brainwashing Pooja. Sonakshi promises to always have Pooja with Nishi. She gets gifts for entire family. She tries to talk to Naren. She gifts him a fitness band, a health monitor. Naren doesn’t break his silence. Veena likes the family photo and wants her family happy. Sonakshi promises to keep the family happy. Veena is thankful to her.

She wants Naren to give another chance to Sonakshi. Rohit is upset that Sonakshi didn’t get any gift for him. She tells that she has got a gift for him. He looks for the gift in excitement. Rani’s letter falls there. Sonakshi shows a beautiful tattoo to him that she made for him. They have a beautiful moment. He is surprised to see his name tattoo. He tells that she would have undergone much pain of the needles to make this tattoo. She tells him that no pain can cause any stir when their love is so strong. Rohit romances Sonakshi.

She informs Netra that she didn’t speak to Rohit yet about her decision. Netra doesn’t want Sonakshi to end her career this way. Rohit gets Rani’s letter and learns about her daughter Sitara, who is in the jail. He thinks Sitara is Rani’s weakness, whom he will use against Rani. Sonakshi goes to give the letter to Rani. Rani learns that Shinde gave the letter to Sonakshi. She angrily bursts out. She tries to cover up the truth. Rohit finds a chance to blackmail Rani about Sitara. Kahaan Hum Starplus Sitara entry will be next in the coming track.