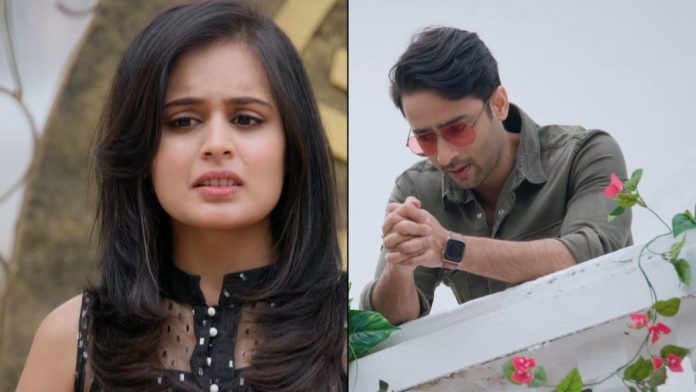 Rishte Pyaar Starplus Upcoming Heartbroken Mishbir Mishti has much belief in Abir and their love. She is sure that once she breaks the wall created by Meenakshi, Abir will accept her. She doesn’t know that Meenakshi is ahead of her plans always. Vishwamber is also threatened by Meenakshi. He doesn’t tell the entire truth to Mishti that Meenakshi had threatened to ruin Mishti’s happiness. He just wants to secure Mishti’s future. He thinks if Mishti gets married to Nannu, she will be very happy and away from Rajvansh family. He loses faith on Abir’s love. He tells Mishti that Abir will never come back to her now, since true love doesn’t fade that way. He thinks of the promises broken by Abir.

He sees Mishti crying for Abir and feels hurt. He tells her that she will get a last chance to get Abir in her life. He also adds that if she fails then she will have to obey the family’s decision and marry Nannu. Mishti doesn’t want to get into a loveless marriage and ruin her best friend Nannu’s life. She just loves Abir and doesn’t want to give up. She goes to meet Abir. Jugnu is happy to give the letter to Abir. He tries to protect the letter from family. He bumps into Kunal. He indirectly tells Abir about Mishti visiting the home last night.

Abir gets big hopes. He tells Nanu that he can decide about his love once he knows Mishti’s feelings. Kuhu meets Mishti and learns that Mishti still loves Abir. She suggests Mishti to not get trapped in a loveless marriage, which will leave her frustrated all life. She asks Mishti to fight for her love if she is sure. Mishti tells Kuhu that she loves Abir and is sure that he loves her too. Kuhu worries that Mishti gave her nod for marrying Nannu due to the family pressure. She wishes the best for Mishti and Abir. Mishti rushes to meet Abir once. Abir asks Parul to go and talk to Kunal. Kunal avoids Parul. Kuhu doesn’t want Mishti to hurt Nannu.

She feels sorry seeing three lives at stake. Jasmeet asks Nannu to refuse for the proposal. She thinks Mishti loves Abir. Nannu tells her that he wants to take a chance and may win Mishti’s love. He tells that he can’t refuse to Vishwamber. Jasmeet doesn’t want to support Nannu in his decision. He handles the matter maturely. He wants her to give Mishti a chance. He feels Mishti deserves happiness.

Kuhu and Kunal have a moment, which spoils by Parul’s entry. Kunal tells Kuhu that he suddenly can’t accept Parul as his mother. Kuhu advises him to take little steps and end the distance. She tries to bring Parul and Kunal together.

Meenakshi gets the letter and swaps it cleverly. Jugnu tells Abir that Mishti had come home and also gave a letter. Abir gets overjoyed. He reads the shocking letter where Mishti states that she moved on with Nishant/Nannu and is very happy. Abir gets heartbroken. Meenakshi burns the letter. She thinks Mishti’s chapter is close now. Mishti wants an answer from Abir. She feels Abir can’t hurt her family this way. Jugnu informs her that he gave the letter to Abir.

She expects Abir to accept their love. The result gets opposite because of Meenakshi. Abir gets manipulated again. He insults Mishti’s feelings because of the huge misunderstanding. Mishti gets heartbroken on seeing Abir’s bitterness. Meenakshi succeeds to tear their relation apart.