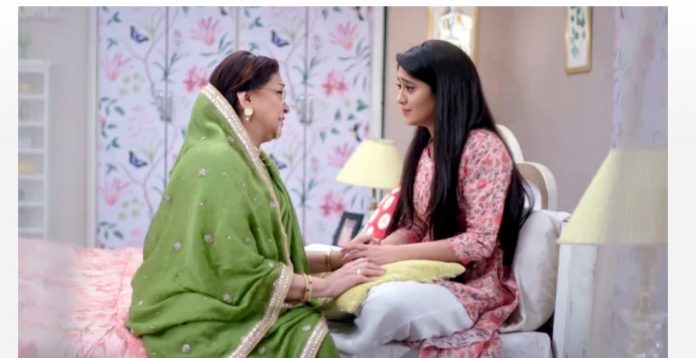 YRKKH Tonight Starplus Upcoming Naira targets Vedika Naira is remorseful over the fact that Vedika had made a deal with Kartik for the kidney donation. She recalls Kartik who revealed her about his deal with Vedika to save Naira’s life. Kartik is equally remorseful that he couldn’t guess Vedika’s true intentions before, even when Dadi had alerted him many times. Naira is helpless to part ways with Kartik knowing he has sold himself to Vedika. Kartik has to live as Vedika’s husband from now. Kartik feels the accident changed everything in their lives. He has saved Naira’s life and lost her forever.

He cries on missing Naira. Manish and Suwarna cry for their son’s sorrow. They didn’t wish this to happen. They realize how helpless Kartik is. They are also forced to accept Vedika as their Bahu. Kairav meets Naira and is happy to see her fine. He asks her why didn’t she come to Goenka house with Kartik and Vedika. Naira hides her sorrow. She asks him to prepare soup for her with Naksh’s help. Dadi meets Naira and gets too emotional on realizing Kartik’s big sacrifice. Dadi apologizes to Naira and hugs her. She feels she has brought Vedika in their lives. She had forced Kartik to marry Vedika.

She tells Naira that Vedika had asked for Kartik’s happiness to save Naira’s life. Dadi regrets hat she didn’t know Vedika’s true colours before. Naira asks Dadi not to feel guilty. She shares her suspicion with Dadi. She tells that Pallavi and Vedika are hiding something from them, there is some mystery around the kidney transplant. She tells Dadi that Pallavi is lying to them, since she covered up for Vedika’s surgery since day 1. She also presents the proof that Pallavi faked the medicines for Vedika, who was just on mild medication. She tells that no doctor or nurse attended Vedika after the surgery.

She tells Dadi that Pallavi is really cheating them. Dadi realizes that Vedika is faking the kidney donation. She asks her to tell the truth to Kartik. Naira tells her that they should just find the truth first and then expose Vedika. She asks Dadi to just keep spying on Vedika at home. Dadi asks Naira to save Kartik from Vedika’s evil. Naira tells her that she will teach a lesson to Vedika. On the other hand, Pallavi informs Vedika about the donor Umesh, who is troubling her. She tells Vedika that Umesh wants to meet her. Vedika is worried that she will get exposed if anyone knows about Umesh.

Dadi spies on Vedika and learns about Umesh. Vedika tells that she can’t handle Umesh. Pallavi tells her that she is going for a seminar. She requests Vedika to meet Umesh once. Vedika thinks someone is spying. She doesn’t see Dadi. Dadi informs Naira that Pallavi wants Vedika to inform Umesh. Naira asks her to find out more about Umesh. She advises Dadi not to let Vedika go out anywhere, so that Umesh comes home to meet her. She tells that this way they can be knowing the matter. Dadi and Naira decide to catch Vedika red-handed. Naira tells her that she can’t come home, but will find some way.

Kairav unknowingly gives an idea to Naira. He tells about Christmas decorations. Naira tells Dadi that she will come home as Santa Claus in the party and spy on Vedika. Kartik misses Naira. Naira tells that she is missing Kartik a lot. Kartik thinks when will they meet now. Naira wants to meet him soon. Dadi meets Vedika and fakes to accept Vedika just for Kartik’s happiness. She tells her that she will accept her as Bahu, just she expects her to keep Kartik happy. She tells that she has compromised just for his sake.

She loves Kartik a lot. Vedika tells Dadi that her word is a big assurance. She asks Dadi to keep Naira away from Kartik. Dadi asks her to arrange a Christmas party for Kairav, if she wants to please Kartik. Vedika agrees happily to get a chance to win Kartik. Dadi and Naira plan to mislead her to catch Vedika into the act. Naira takes a disguise to enter Goenka house. Will Naira find out Vedika’s scheming evil? Keep reading.