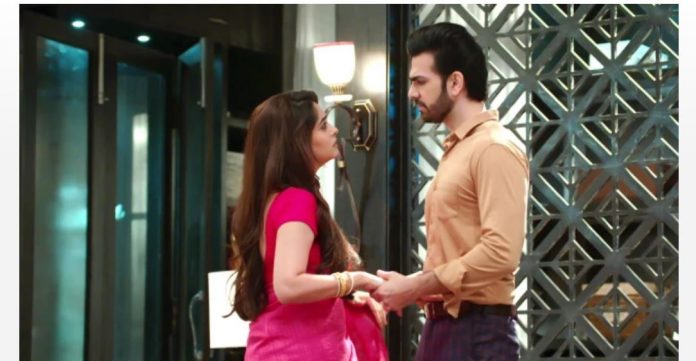 Kahaan Hum Ronakshi Upcoming Naagin Dad Ki Dulhan Sonakshi doesn’t like Rohit lying to her all the time. She returns home after learning about his new lie from Rani. She stays silent and distances herself from Rohit. Rohit tries to talk to her. Sonakshi and Rohit breakdown. She is much upset and is emotional. She didn’t know Rohit will weaken their relation by lies. She feels hurt that he knew about Nishi’s plans and still hidden everything. She didn’t expect Rohit to hide things from her. She doesn’t vent anger on Rohit. Rohit dreams that she is forgiving him.

He is seen drinking a lot for the first time. He exhibits his sorrow. He gets much drunk and imagines Sonakshi around. He finds Sonakshi sleeping. He fails to communicate with her. He feels his lies are putting his relationship into trouble. She ignores him. She hopes Rohit convinces her.

Now, I think rohit should say each n everything to Sonakshi. It will take time take for Sonakshi to accept all this but Sonakshi is a very intelligent, she will understand all these n will always with Rohit as she loves him unconditionally. Where love is unconditional, no evil thing can destroy it..

Naagin Spoilers Today Vrinda gets drunk in the party. She dances with Dev. Dev falls for Vrinda. He is madly in love with her. He wants to wed her. They both have a cheerful dance. Dev gets to see Vrinda’s cheerful side and loves it. Few guys try to take advantage of Vrinda. Rajat is Vrinda’s fiance.

He is also drunk and troubles Vrinda. He is much greedy. He drinks the costly liquor. He forces Vrinda for the dance. She refuses to him. Rajat tells her that she is his fiancee and shouldn’t mind dancing with him. Dev scolds Rajat and also punches her. Dev reaches to her rescue. Nayantara tries to keep Dev away from Vrinda. She dances with Dev and engages him.

Kabir is highly upset with Nia for leaving her US job midway. Nia gets sad too. She comes home and tells Amber that he needs a partner who is equal to him. Amber asks what? Nia says you need a partner. Amber asks which partner? Nia says, life partner. Amber gets shocked and tells that he can’t give Anjali’s place to anyone. Nia asks him to rethink about marriage. Amber refuses and gets upset with Nia. Nia hopes to find a good partner for him.

Amber wants to explain Nia that he doesn’t need anyone in his life. Even then, Nia and Guneet plan his date. They send him on a date by emotional blackmail. He gets troubled on the date, where he gets trapped. He gets helpless to perform the Salsa dance with his date. Amber will be seen struggling in the dance in a hilarious way. Bua torments Guneet for not marrying and not having a family. Guneet loses her cool on hearing Bua’s taunts.

Bua argues with Guneet on her shameless take on her life. Guneet doesn’t want any pressure on herself. She wants to stay single. She asks Pammi not to care for Dolly’s taunts. She gets stressed because of Dolly. She goes to fill in her details on the matrimonial site. She fills wrong details to get saved from marriage. Amber and Guneet will have a connect on the matrimonial site.