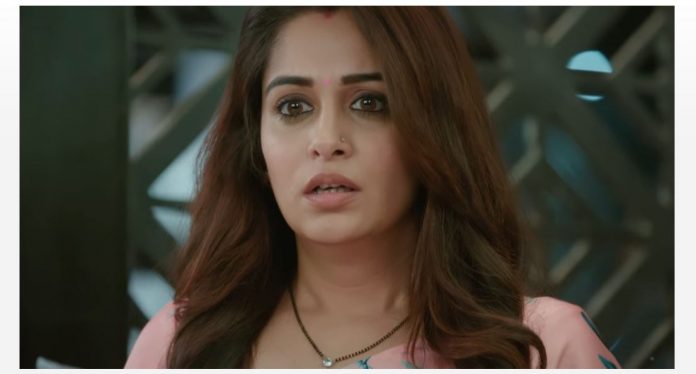 She awaits the blackmailer, who is already present there. The blackmailer wants to be sure that she is alone there. She gets summoned by Veena, who wants her at the hospital soon. Sonakshi tells Veena that she will come soon. Veena tells her that the media is going out of control and Ajit isn’t able to handle them alone. Sonakshi informs Sumit that she needs to leave and even he should go soon. The blackmailer sees Sumit and stops from meeting her. He follows Sonakshi to the hospital. The blackmailer Yashwant informs his boss that Sonakshi got Sumit along. Veena and Naren are bothered by the media questioning about the surgery.

They want Rohit to succeed and not lose his fame. Sonakshi reaches the hospital and finds the media creating a ruckus. She tries to handle the media. She tells them that Rohit will answer them. Rohit meets them and acts serious, which makes everyone assume that the surgery isn’t successful. Rohit gives the credit of his success to Sonakshi, whose belief made him perform the surgery by his best talents. He tells that he has performed the surgery successfully. Sonakshi and family get pleased to know it. They answer the media.

Sonakshi sights Yashwant there and is worried. She finds Veena missing. She leaves the interview midway. She rushes after Veena and expresses her concern. Ajit hinders them from talking. Sonakshi gets pulled by Yashwant. He threatens her about revealing the truth to Veena. Sonakshi comes to the point and asks him the demands. He scolds her for acting smart and double crossing him. He tells her that he is aware of Naren’s truth and can ruin Sippys. He tells that if she screams, then the media would also come and know the truth of Naren’s affair.

She gets worried. He demands one crore from her. She agrees to him to save the family peace. She wants to know his relation with Sippys. He doesn’t answer her. Rohit and Sonakshi spend some quality time. He tells her that Veena means a lot to her and he wants her to be happy always. She tells him that she will protect Veena from the truth. She realizes that he loves Veena the most. She isn’t insecure. He tells her that he loves her as well. He asks her to go home, since he has to check the patient. Sonakshi stays worried.

She goes to the bank to break her fixed deposit and arrange one crore. Suman learns about Sonakshi breaking the deposit. She gets worried. She doesn’t want Sonakshi to quit her show or do anything stupid. She calls Sonakshi to ask the reason. Sonakshi promises to tell everything. She asks Suman not to inform Rohit. Suman wants to know what’s happening in Sippy mansion. Pari disconnects Suman’s call, since she is with Rohan. Pari and Rohan are cheating Tanya again. Sonakshi hides the money in the cupboard. She doesn’t want Rohit to know it. She gets some old news articles. She finds Yashwant in the family picture.

She realizes that Sippys know Yashwant well, that’s why he is the family picture. She wants to find the truth. She doesn’t confide in Rohit. She commits another mistake by keeping this a secret. She meets Yashwant and hands over the money to him. The big revelation happens since Yashwant is blackmailing Sonakshi on Ajit’s command. Ajit is the mysterious person to blackmail Sonakshi about Naren’s truth. It gets revealed that Ajit had overheard Rohit and Sonakshi’s conversation that day and learns Naren’s shocking truth. Why is Ajit blackmailing his own family? Keep reading to get the answers.

Best Comment by Jazz:
Sonakshi should just honor Rohit’s trust in her and not to reveal this bitter truth to Veena at any cost. This way she would invite her own problems in married life. I guess together Ronakshi would handle the situation better. Till then let’s find out who is this mystery man after all why is she after Sona? Someone from home trying to frame Sona n break Ronakshi apart? Well tine will tell. All we viewers want the makers should not get Sona involve in this blame game once again.