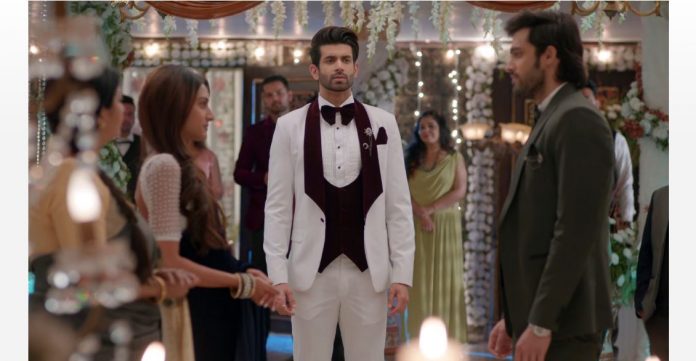 Kasautii Starplus Surprising Anurag love confession Anurag is confused over his feelings for Prerna. He thinks just Sonalika can help him get free of his dilemma. He has already tried asking Prerna. He calls up Sonalika/Komolika and asks her to meet him. Komolika tells Mohini that Anurag is calling her. Mohini asks her to avoid talking about Prerna. Prerna worries for Anurag. She wishes to make Komolika away from their lives. Viraj evaluates his feelings for Prerna. He feels that he can never refuse to marry the sweet and simple Prerna. He thinks he had lost his wife and child, and wanted to get happiness from Prerna. He wanted Prerna to complete him and fill his loneliness.

He thinks if he has a problem with Anurag’s friendship. He wants to trust Prerna. He wishes to get her love. He is sure that once he wins her love, she will do anything for their love. He gets big hopes. Veena overhears him. She gets speechless. Komolika comes across Ronit and asks him to get Prerna for her. Ronit swears to kidnap Prerna. He tells that he has come well prepared. Shivani suspects him. She doesn’t get sure that he is Ronit. She wants to check again. He runs away. He asks his aides to carefully follow Prerna and kidnap her.

Shivani follows him and leaves him frustrated. He asks Komolika to save him from Shivani. Komolika asks him not to make any mistake again. She hinders Shivani and gets into a deliberate argument. Ronit escapes by then. Shivani tells Komolika that Anurag and Prerna are meant for each other. Komolika finds them locking eyes. She gets jealous. Moloy asks the guests to come on the dance floor for the couple dance. Viraj wants to dance with Prerna. He gets away when he sees Anurag wishing to dance with her. Komolika asks Viraj for dance with a purpose to brainwash him. Shivani tells Anupam that she has seen someone and maybe Prerna is in danger.

Anupam wants to help her. Nivedita stops Anupam from helping Shivani. Shivani thinks she is enough to protect Prerna. Ronit stays hidden inside the room to get rid of Shivani. Anurag and Prerna have a romantic dance. They share light moments. Viraj tells Komolika that he wants to dance with Prerna. She poisons his mind against Anurag’s fondness for Prerna. She tells him that Anurag has feelings for Prerna, which is wrong. She asks him to keep Prerna away from Anurag. She tells him that she can’t stop Anurag directly and needs his help. Viraj agrees to her. Prerna feels some pain and gets Anurag’s support.

Anurag feels responsible for Prerna’s well-being. Moloy is happy to see this, while Mohini, Veena and Viraj find this odd. Anurag looks after Prerna like a good friend. Viraj senses that their relation is more than a normal friendship. Komolika provokes him to show Anurag his limits. Ronit gets blocked by Shivani. He gets helpless to hurt her and make her out of his way. Viraj confronts Anurag about his feelings for Prerna. Anurag admits that he loves Prerna. He wasn’t aware of his feelings before. He is grateful to Viraj for making him realize this.