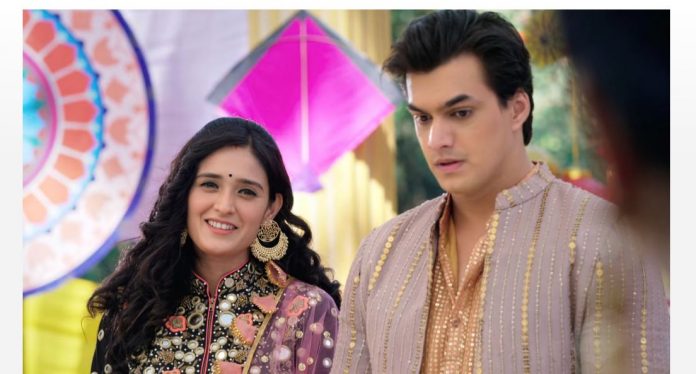 Yeh Rishta Lav Kush entry Upcoming twists today Goenkas miss out Naira in the Makar Sankranti celebrations. They wish Naira added colours in their special festive. Naira also misses Goenkas. Vansh tells them that he wants Naira and Kairav, else he won’t celebrate any festival. He doesn’t find any fun without Kairav. Kartik is helpless and apologizes to Vansh. He tells Vansh that they will try best to entertain them. Vansh gets upset with them. Vedika tries to win their hearts. She doesn’t want to give up. She tells them that they will start flying the kites. Kartik becomes emotionless and agrees to her.

Vedika fails to understand that he isn’t happy. Goenkas ignore Vedika on seeing her attempts to connect. Kairav misses Kartik and Goenkas. He wants to go to Goenkas and celebrate. Naira asks him to go with the driver. Kairav doesn’t want to go leaving her. She pacifies him. Akhilesh and Surekha await their sons Lav and Kush. Dadi is upset on Vedika. Vedika tells Dadi that she is just following her tips. She wants Dadi to accept her as Bahu. She apologizes to Dadi. She tells that she is just handling her marriage. Dadi reprimands her for the wrong move. She tells that Vedika is worse than their enemy. Vedika gets upset.

She overhears Manish and Suwarna, who worry for Kartik’s sorrow. Manish feels Vedika saved Naira’s life and made Kartik a puppet. He tells that Kartik is much sorrowful and missing Kairav. He feels Vedika is doing much wrong with Kartik. Vedika informs Pallavi that she can never take Naira’s place in Kartik’s life. She tells that Naira was right, Goenkas belong to her. Pallavi asks her not to get into Naira’s words. She tells that Naira intends to scare Vedika. She asks Vedika not to leave her rights. Vedika doesn’t think Kartik will accept her.

Pallavi tells Vedika that Naira has no proof against them and even Umesh is away now. She asks Vedika to keep trying until she succeeds. Kartik sinks into Naira’s memories. Vansh insists to go to Kairav. Samarth and Gayu take him to Kairav and Naira. They happily celebrate the festive. Even Goenkas elders join Naira and Singhanias. They don’t want to be with Vedika. Vedika gets worried assuming Kartik is talking to Naira on the call. Naira clears her doubt. Naksh reaches Umesh’s house and finds it locked. He learns that Umesh has left some time back. He wonders where did Umesh run away.

Moreover, Naira meets Goenkas. She tells Dadi that Vedika and Kartik would be together. Dadi worries that Kartik maybe in more sorrow. Naira asks her not to stress, Kartik would be fine. She wishes that Kartik was around. Naira celebrates with Goenkas and Kairav. They sing and dance in the festive. She senses Kartik’s presence. She gets to see him making a grand entry. She is overjoyed.

Soon, she sees Vedika with him. She steps back. Vedika shows her rights on Kartik. She asks Kairav to spend time with Kartik. Vedika pretends to be caring towards Kartik’s emotions. Naira wants to break her silence and tell the truth about Vedika. Kartik will know Vedika’s truth. There will be Lav and Kush’s entry in the story.