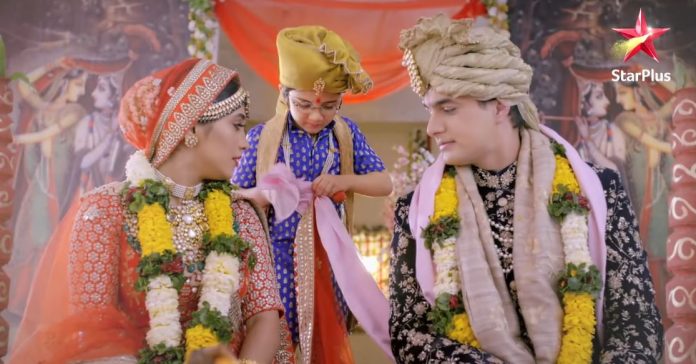 Yeh Rishta Latest Upcoming Promo Kaira Vivah Kartik and Naira get into a moment when Vedika gets away. They recall their good times. Naira loses control on her feelings. She runs to hug Kartik. She apologizes to him for hiding the matter for long. She tells him that she will tell him the truth right away. She tells Kartik and Goenkas that Vedika cheated them, she didn’t donate any kidney even when there was a kidney match. She tells that Vedika and Pallavi conspired this and made Umesh donate his kidney. She tells Goenkas that Vedika had cleverly made the deal with Kartik before the surgery, she had pressurized Kartik and snatched his happiness.

She tells that she regrets for everything, Kartik was helpless and agreed to Vedika to save her life. She asks Kartik to realize Vedika’s evil. She is much angry on Vedika for not feeling guilty. She tells that Kartik doesn’t love Vedika and is too helpless to obey her command. She wants Vedika to get punished. She tells Kartik that Vedika cancelled their divorce intentionally, it was all her plan to win Kartik. She further adds that Vedika is planning the honeymoon just to get Kartik’s love.

Kartik and Goenkas get angry. Kartik thanks Naira for bringing the truth out. He ends his terms with Vedika. He reprimands Vedika for the worst fraud. He asks her to get out of his life if she wants to get herself saved from his revenge. Vedika threatens to frame Naira and Kartik in her suicide blame. She tells them that she will not let Kartik unite with Naira. She threatens to ruin their lives. She shockingly takes the extreme step and commits suicide. Naira realizes that she was daydreaming. She is terrified. Vedika taunts her to stop dreaming about Kartik.

Vedika tells the family that she wants to celebrate with them. She shows her favor that she has brought Kartik to Kairav. She asks Naira not to turn her bad by making her helpless. Naira isn’t scared of Vedika. Vedika tells Naira that she can separate Kartik and Kairav as well. Naira gets under the decorations cloth. Kartik worries for Naira. He hugs her and cares for her. Vedika finds him panicking. She is much jealous of Naira. She hurts Naira telling about the honeymoon trip. Naira and Dadi call up Naksh to know if he found Umesh. Naksh tells Naira that he couldn’t find any proof. Naira is worried and wants to cancel Vedika’s honeymoon plan.

Manish wants Kartik’s Sankranti to get special. Suwarna tells him that they shall pray for Kartik’s happiness. Dadi also wishes Kartik stays happy. Kartik and family get into a kite flying competition. Naira wants to tell Vedika’s truth to Kartik. Kartik gets a shocking call. He doesn’t want to scare the kids and goes away. The family wonders the reason for his anger. They think if the matter is related to office. Dadi guesses that the matter is related to Vedika. Kartik vents his anger. Naira stops him to know the matter. Kartik tells her about Vedika’s fraud.

Naira tells him that she wanted to tell him the truth, but didn’t get any proof. They both make a plan to compel Vedika for the confession. They plan an elopement drama to shock Vedika. Vedika confesses her mistake and regrets for it. She will be leaving from Kartik’s life. Kartik and Naira’s Vivaah track will begin.