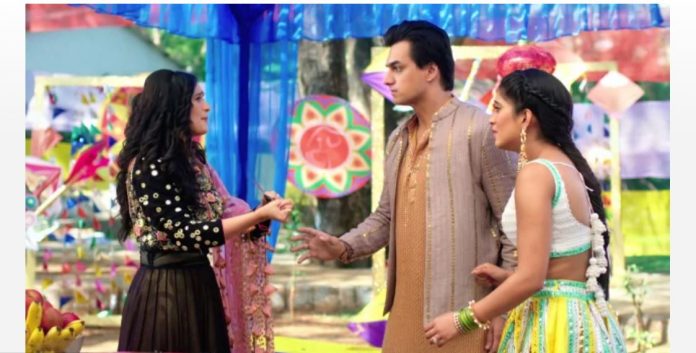 YRKKH Beyhadh Upcoming twists ShubhAarambh Spoilers Rudra and Ananya are getting engaged. Everyone is tensed for Rishi. Mrityunjay had locked Rishi in the room. Rishi goes away to meet Maya. Rudra blames Mrityunjay for always dominating their lives. He argues with his dad. He gets a shocking video and learns about Rishi’s suicide. Rudra is broken down. He can’t believe that Rishi will take his life. Rudra and Mrityunjay are worriedly shocked. They both love Rishi a lot. They want to protect Rishi by finding him soon. Mrityunjay knows his enemy is targeting Rishi. He wants to save his son. Rudra and Mrityunjay take different paths to find Rishi.

Yeh Rishta Kya Kehlata Hai:
Naira faces another crisis. She gets ready for the wedding in the lahenga gifted by Dadi. She happily speaks to Kartik on the video call and dances. She tells him that she is coming to the mandap soon. She runs downstairs and the lahenga gets stuck in the nail. She gets worried that her new bridal lahenga will also get torn. She is already upset that Akshara’s wedding lahenga got burnt. She doesn’t want to get the another lahenga torn.

She prays that she doesn’t want to marry wearing any school uniform. Her prayer get answered. She manages to save her lahenga. She happily leaves for the temple, where her groom Kartik is waiting for her in the mandap. Gayu and Kairav get Naira to the mandap. Kartik and Naira meet as the would be husband and wife. They get happy and go ahead to get married.

Colors’ Shubh Aarambh:
Raja and Rani have a romantic moment. Their love story begins once again after their marriage. They plan their honeymoon in Switzerland. She tells him that she will weave a sweater for him. The big drama begins when Rani’s brother gets blamed for the theft. Raja’s brother bashes him up. Rani gets the news. She gets defending her brother. She gets blamed for the plotting. She gets forced to leave her Sasural. She comes home with her luggage, which shocks her mum.

She tells her brother that everything happened because of him. She hugs her mum and shares the pain. She tells that Kirti had ousted her from the house. She wants to prove her brother’s innocence. She is aware that her brother is involved in gambling, but can never rob in her Sasural.