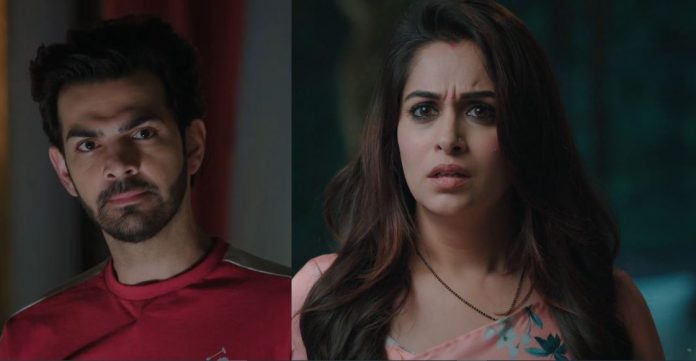 Kahaan Hum Shocker Sonakshi Sippys Huge revelation Sonakshi gets to see Yashwant in the family picture. She wants to know about him. She thinks if Yashwant has some relation with the Sippys. She wakes up Rohit and asks him about Yashwant. He doesn’t answer her. She asks him to recall and tell her. He tells her that Veena keeps the newspapers cutting whenever they come in the news. He tells that he doesn’t know the man in the picture. He asks her not to bother more and let him sleep. Sonakshi continues to find the answer. She asks Vimmi about Yashwant, knowing that Vimmi is working in Sippy mansion since long.

Vimmi too doesn’t know Yashwant. Rohan and Pari think its too easy to cheat Tanya and Suman. Suman asks Pari to tell her about Sippy family. Pari lies to her. Rohan tells Pari that everything is fine. Rohan gets alert when he learns about the spy camera. He finds the camera under the lamp. He realizes that Tanya had fixed the camera. Tanya calls him home. Rohan tells Pari that they will get exposed if Tanya reveals the truth to family. Sonakshi asks Rohan about Yashwant. Rohan hurriedly wants to meet Tanya. He tells her that Yashwant is Ajit’s friend. Sonakshi thinks Ajit may help her.

Rohan meets Tanya and finds her behaving normal. He gets relieved. He thinks Tanya didn’t fix the camera. He calls up Pari and tells her that his fear has ended, Tanya doesn’t know their affair. Sonakshi goes on to Ajit to know about Yashwant. Ajit lies to her that he met Yashwant in the party and isn’t in touch with him these days. Sonakshi wonders why does he keep terms with such strange people. Sonakshi asks him to be away from such people. Ajit asks her the matter. Ajit tells her that he can help her if there is anything.

Sonakshi hides the blackmailing matter. She offers to get coffee for him. She gets the writing pad and realizes that she was getting the notes from the same pad. She suspects Ajit. She finds him venting anger on Naren’s name. She thinks how can Ajit do this with the family, just because he is upset on Naren. She doesn’t want to reach to any conclusion until she finds a solid evidence. She goes to meet Yashwant. She takes the money along. Tanya plans to have a jewellery exhibition. She asks Rohan to help her. Rohan wants to support her just to keep her engaged in her work. He fakes his concern for her and their baby. Tanya plans to expose him in front of the family.

She knows that Sippys won’t forgive Rohan. Meanwhile, Suman arrives to meet Sippys. She asks Veena about taking the dowry from Sonakshi. She accuses Veena for snatching one crore from Sonakshi. She speaks rudely. She tells that Sippys had always blamed Sonakshi and made her ruin the career. She asks Veena how can she compel Sonakshi to give away her savings. She scolds Veena for being dual faced. Veena defends that she doesn’t even know Sonakshi’s salary amount. Suman tells that Sonakshi has broken the fixed deposit of one crore.

She adds, if Sonakshi didn’t share this with her, then it means the purpose of the withdrawal is for the in-laws. Veena tells Suman that she didn’t ask for any money. Rohit asks Suman to talk to Veena well. He promises to find the reason from Sonakshi and inform Suman. Veena doesn’t want to forgive Suman. Rohit calls Sonakshi to know about the money. She doesn’t answer his calls. Sonakshi hands over the money to Yashwant. She asks him to never trouble her family and forget Naren’s secret forever. Yashwant turns out to be Ajit’s aide.

Ajit meets him. Yashwant praises Ajit’s plan and gets away with the money. Sonakshi catches Ajit red-handed. She slaps him. Ajit gets to his senses. He apologizes to her and sheds tears. He admits his huge loss in gambling. He tells that he had to pay one crore to Yashwant and had no option. Sonakshi asks him how could he share such a sensitive truth of his family with an outsider. She wants him to realize his big mistake. He feels sorry.

She is worried that Yashwant may misuse the secret. He tells her that he hates Naren for being such a big cheat. He tells that Naren doesn’t forgive children for petty things and keeps on insulting them. He tells that Naren always dominates them, as if he is himself having a clean character. He had learnt the truth from Rohit and Sonakshi’s conversation. He tells that he wanted to use the secret to clear off his loans. She tells him that she will tell Rohit about his huge mistake. He begs her to not tell anything to Rohit. He feels he can never bear Rohit’s hatred.

He expresses that he can’t tolerate the truth, that Pooja is Naren’s illegitimate daughter. She agrees to hide the truth for the family’s sake. She returns home and gets confronted by Rohit for the one crore. Sonakshi lies to Rohit again, because of her promise to Ajit. Sonakshi gets another shocker when Akash reveals about Rohan and Pari’s affair. He accuses Pari for breaking Tanya’s marriage. Tanya shows Rohan and Pari’s shocking video to Sonakshi. Sonakshi gets ashamed of Pari. How will Sonakshi pass this new hurdle? Keep reading.

Omg Ajit is behind the blackmailing but why on earth Ajit? He seems to be always the cutest funniest lovable boy in sippy family. There got to be some mystery of layers behind this I guess, why would Ajit blackmail his own family? Whatever it is, Sona should not be framed again in this whole game. But Sona confide in Rohit before the volcano erupts on you this time.