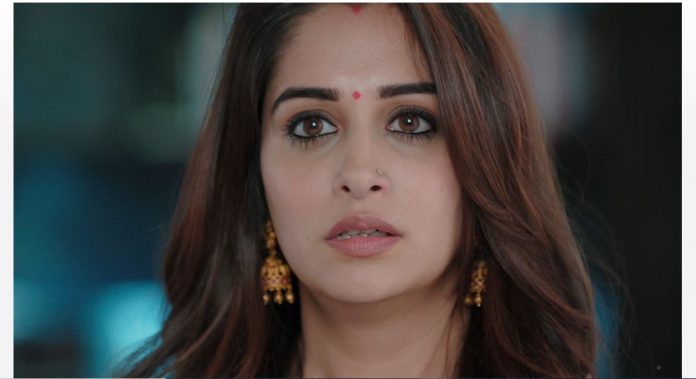 Kahan Hum Shocker for Sonakshi Pari affair exposed Rohit confronts Sonakshi about the huge amount she had withdrawn suddenly. He tells her that Suman is blaming them for dowry, which isn’t acceptable. She lies to him that she had to help Sumit in finance since the latter is buying a house. He asks her the reason for hiding a good deed. He tells her that she could have told Suman about it, instead of keeping it a secret and causing problems for Veena. He tells her that he already told her that he can’t see Veena upset. She apologizes to him. She didn’t wish Suman to hurt Veena.

She tells him that she will apologize to Veena. Rohit gets upset on her. He gets a back sprain post his sleep on the couch. Sonakshi insists to relieve his pain. Meanwhile, Ajit gets too drunk and tells the taxi driver about Naren’s cheat. He tells that he hates his dad. Taxi driver gets irritated and leaves him on the road. He takes away Ajit’s watch. Ajit calls him a thief and falls down. Suman comes across Ajit and takes him home. She doesn’t take him to Sippy mansion seeing his worse state.

Rohit clears to Sonakshi that he never wants to face the choice between Veena and her. He tells that he respects Suman, but can’t accept her misbehavior. He loves Veena the most. Sonakshi tells that she didn’t invite her family in the jewellery exhibition. Veena asks them about Ajit. Sonakshi hides the matter from Rohit once again.

She tells them that Ajit would be coming soon. Rohit asks Veena not to worry. Sonakshi apologizes to Veena. Veena doesn’t vent Suman’s frustration on Sonakshi because of their strong bonding. Sonakshi tells that she loves Veena a lot. Rohit is happy to have them. They share a group hug. Veena wants them to happy. Ajit wakes up in Rastogi house. He learns that Suman got him home at night. Ajit rushes to leave. Suman confronts him about Naren’s affair.

This worries him. She tells him that he had told her the entire truth of Naren’s affair and Pooja’s illegitimacy. She criticizes Naren for being dual faced. She tells him that Naren created a ruckus on Sonakshi’s rain dance sequence and gave her an ultimatum to quit acting.

She asks him how could Naren hide his heinous truth from the family. Ajit feels ashamed. He tells her that he hates Naren for his cheat. He doesn’t want to discuss about it. He requests her to keep the secret safe with her. He tells her that the matter is sensitive and none should know about it. Suman gives her word that she won’t tell anyone, since even Sonakshi’s name is linked to Sippys now. She doesn’t want Naren’s past to bring disgrace for Sonakshi. Ajit makes a leave when she gives an assurance to keep up Sippy’s prestige intact. Suman gets Rohit’s invite for the exhibition. Rohit apologizes to her.

Best Comment by Jazz:
Finally the truth is out. Ajit that’s a shame boy. You did not even think twice before letting the dark secrets out to a stranger like Yashwant. I mean anyone can take the advantage of this and guess what who would face the consequences? At the end Sona will face it. Sona should not repeat her mistakes hiding things from Rohit and try to solve this problem all alone. Well Sona, no family is perfect. There is problem in every house, but you should come out of reel life and face real life.