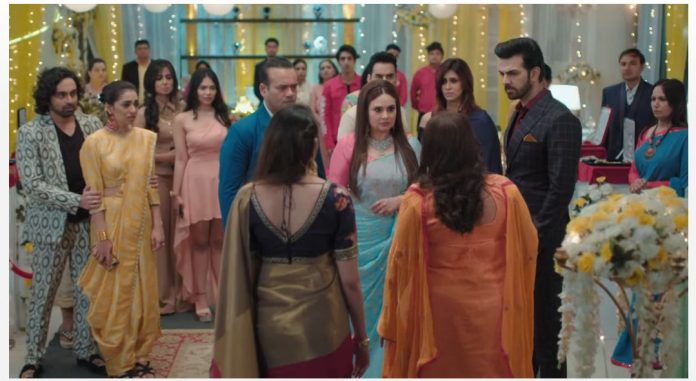 Kahaan Hum Starplus High voltage drama Sippy stunned There is a high voltage drama in Sippy mansion during Tanya’s exhibition, all because of Suman’s stormy entry. Suman reveals the big secret of Naren’s affair. The ugly and unacceptable truth that Pooja is Naren’s illegitimate daughter also gets revealed publicly, ruining the pride of Naren Sippy. Sonakshi pacifies a heartbroken Tanya. She finds Pari and Rohan at fault together. Rohit blasts his anger on Sonakshi, even though he admits that Sonakshi has no control on her family. He gets raged up seeing Tanya crying. He couldn’t believe that Rohan would cheat Tanya, that too for Pari’s sake.

He tells Sonakshi that Pari took his warning lightly before and went on to continue this shameless affair with a married guy Rohan. Sonakshi is sinking in tension seeing Rohit accusing her family. She knows Pari has done wrong, but feels Rohan took the initiative. She tells that she will not spare Pari. Rohit insults Pari a lot, which makes Sonakshi accuse Rohan equally. She tells that Rohan must have remembered that he is married to Tanya. Rohit gets raging again when she blames Rohan.

He admits that its his mistake to marry her. He tells her that knowing her family so well, he should have listened to Naren and others, and called off the alliance. He feels he was blind and madly in love with Sonakshi that he committed a big mistake by marrying her. He speaks a lot in anger without thinking that his words are stabbing her heart. She feels bad that he regrets to marry her. She never thought that he will regret and question their relationship. He wants to rush after Veena to meet Suman and Pari.

She doesn’t want him to take any step in anger. She tells him that she will accompany him. He tells her that Veena is shattered knowing the truth. Sonakshi worries that Veena had seen the shameful video of Rohan and Pari’s intimacy. Veena barges into Rastogi house. She slaps Pari. She humiliates Pari and reprimands her for the misdeed. She questions Pari for her love affair with Rohan. She asks Pari to get married, instead chasing a rich married guy. Pari doesn’t want to bear the humiliation.

Veena counts her mistakes and also Suman’s poor upbringing. Pari stops Veena from slapping her and goes on taunting Veena for the bad upbringing. She reveals Rohan’s casanova image and series of affairs he had in the past after his marriage to Tanya. She asks Veena to look into her upbringing and try to analyze Rohan’s mistake.

She misbehaves with Veena, shocking Rohit and Sonakshi who just reach there to witness the drama. Sonakshi slaps Pari for her rudeness. Pari doesn’t want to listen to anyone. She has no regret that she loves Rohan. Veena warns Pari against meeting Rohan. Pari doesn’t care. Veena is too disturbed. Suman isn’t at home. Sonakshi takes Veena with her. Munya provokes Pari after they leave.

Pari angrily calls up Rohan at her home to share the incident. Rohan meets Pari and panics on knowing that Tanya has exposed his affair. Pari tells him that Veena can’t treat her like nothing. She feels Veena had slapped her and hurt her ego. Rohan consoles dejected Pari. He promises to take a stand for his love. He tells her that he will not get into family pressure and abandon her. They get caught by Suman. Suman learns the entire story.

Sonakshi is too disturbed that everyone is Sippy family is in tears because of her. Veena shows some understanding. She doesn’t blame Sonakshi, like Rohit did. Veena tells Sonakshi that she loves her a lot, but won’t allow her family home from now on. Sonakshi respects her decision since Pari is really at fault. Rohit stays miffed. Tanya gets support from entire family. She copes up from the emotional breakdown since she had already know Rohan’s infidelity. Veena tells that though she loves Rohan, she will stand by Tanya, whom she loves even more. The exhibition gets appreciation for Tanya. Sonakshi flaunts Tanya’s designs and gets praised too.

Sippys try to act normal in front of the guests. Rohan arrives and faces Rohit’s wrath. He doesn’t get scared of Rohit and claims to love Pari. Sonakshi controls Rohit’s temper in front of the guests. Veena loves when her family gets praised as a perfect family. Suman makes a stormy entry and disagrees. Veena and Sonakshi worry with her arrival. Sonakshi wants to take her mother to her room. Suman asks her not to side with her in-laws and try to defend her younger sister for once.

Veena wants to talk to Suman in private about Rohan and Pari’s affair. Suman gets more louder and tells that she is totally fearless to voice herself. She asks Veena to let the people know the real truth of Sippy family. Rohit gets scared that Suman will be mentioning Rohan and Pari’s affair. He doesn’t know what shocker is awaiting him. Suman reveals about Pari’s affair with Rohan Sippy. She accuses Rohan, who is equally responsible for the affair. Veena and Suman get into a heated argument. Veena accuses Pari for wooing Rohan and ruining his family values.

Suman doesn’t get quiet and taunts on the fault being in blood line. Sonakshi and Rohit realize where the matter is heading and try to stop Suman. Suman threatens to slap Sonakshi and restrains her. She goes on to blurt out the truth that Naren also had an extra-marital affair, which isn’t known to Veena. She tells that Rohan got the infidelity genes by his dad. She laughs on Veena who doesn’t know that Naren is already raising his illegitimate daughter in his household. Roht gets terrified. He gets mistaken that Sonakshi revealed the sensitive matter to Suman.

He still hopes that Suman doesn’t name Pooja. Veena and Naren deny the blames. Suman turns the loudest and adds that Pooja is Naren’s illegitimate daughter. Veena, Pooja, Rohit feel most affected by the truth. Veena refuses to believe Suman. Naren calls the security to oust Suman. Suman insults Naren. She tells that she has the proof with her. Ajit gets panicking that his name will also be known. He had revealed the truth to Suman in drunken state. Suman takes the extreme step by asking Rohit to swear on Sonakshi and deny her if he has the courage to lie.

Why it is shown that all the troubles are in Sonakshi’s life only? Please show some romance also. Otherwise this will become boring. Every time Ronakshi are shown fighting with each other and the whole family blames Sona only. Even Rohit do not listen to her point of view. Please show something different.