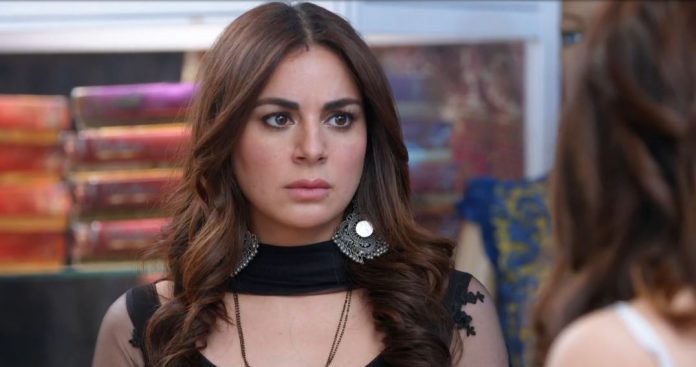 Kundali Bhagya Preeta framed Karan promises Rishabh Ramona requests Rakhi not to invite Preeta home, since Preeta has tried to break Mahira’s engagement. She asks Rakhi not to hire Preeta as a physiotherapist for Dadi. She promises to get the best doctor home. She asks Rakhi to keep Preeta away from the family. Kareena supports Ramona. She tells them that everyone was tensed for her mother, so she had to conceal the fact that Mahira hates to see Preeta at home. She tells that Mahira feels insecure with Preeta’s coming and she also requested the same. Dadi agrees to Ramona and Kareena.

Kareena tells hat she will call Preeta and stop her from coming home. Sherlyn informs Kareena about Mahira’s accident. The family gets big shock on hearing this bad news. They want to rush to the hospital. Dadi feels ache in her foot. She fails to walk. Rakhi stays back to take care of Dadi. Karan and Rishabh reach the airport. Karan doesn’t want Rishabh to go. Rishabh asks him to express his wish. Karan asks him not to go. Rishabh tells that he will be back in three days, its important to attend the meeting. Rishabh asks Karan to call him whenever he misses him.

He tells that they can talk anytime. He makes Karan promise that he won’t do anything wrong, since everything is getting fine in the family now. He signs about Preeta. Doctor treats Mahira and tells about her minor injuries. Mahira gets conscious soon. Shrishti cries and tells Preeta that she is scared to lose her sister. Preeta pacifies Shrishti knowing that nothing can happen to them when they have Sarla’s blessings. Preeta cheers up Shrishti. Sherlyn plans something worse. She calls the police to report about Mahira’s accident.

Ramona and Kareena come at the same time. They ask about Mahira. Preeta tells them that Mahira’s treatment is going on. She introduces herself to the police. Sherlyn lies to the police that Preeta is behind the accident. Inspector wants to take Preeta to the police station. Preeta tells that she was just present at the accident site. Sherlyn shocks them by telling that Preeta was trying to kill Mahira and intentionally pushed Mahira in front of the truck. Preeta and Shrishti get a bad shock. Ramona and Kareena believe Sherlyn.

Karan returns home and finds Rakhi and Dadi tensed. He asks the reason. Rakhi tells that Preeta did not come. He thinks of Preeta. Rakhi tells him about Mahira’s accident. He gets worried too. Mahira tells the doctor that she is acting to be ill, since her life is in danger. She complains about Preeta. He doesn’t believe her. She asks him to just help her by stating her case as critical. She tries to bribe him. He doesn’t want to lie. She threatens to commit suicide. She compels him to help her. She feels she will be safe in the hospital. He agrees to take money from her. He asks if Preeta really tried to kill her.

Preeta and Shrishti try to clear their names. Ramona threatens them. Doctor lies on Mahira’s saying. Preeta wants to meet Mahira. She tells inspector that Mahira will tell the truth that she is innocent. Sherlyn tells that she isn’t lying. Preeta tells about Sherlyn’s personal enmity with her. Inspector permits her to meet Mahira.

Kareena also blames Preeta. Preeta thinks she got badly stuck. Shrishti is also worried thinking if Mahira also frames Preeta. Inspector tells Preeta that he is doing his duty and allows her to meet Mahira. Preeta meets Mahira to get her welfare. She tells Mahira about Sherlyn calling the police and accusing her for the accident. Mahira also blames Preeta. Preeta gets arrested. She shouts out her truth. Shrishti challenges that she will free Preeta from the jail.