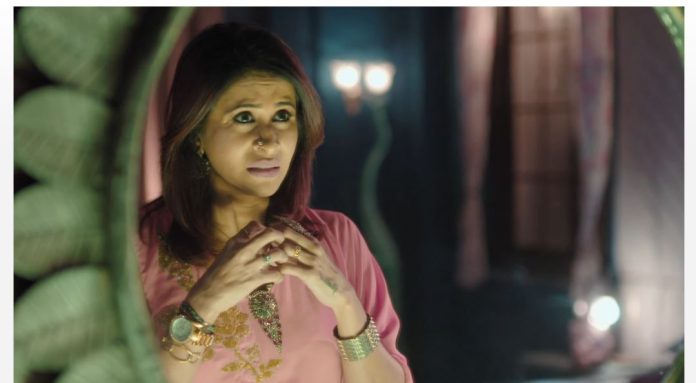 Kahaan Hum Nishi insane act Sonakshi lands in jail Sonakshi meets Naren with a request to change his decision. She tells him that the family should get equal share in the property, else the family will get divided. Naren asks her if she wants Rohit’s share. She tells him that the family will get into a dispute for their rights. Naren really thinks over his decision. Nishi overhears them. She finds Sonakshi always interfering in the family matters. She goes to Naren to ask him about his decision. Rohit learns that Sonakshi had planned the NGO ladies protest drama. He comes across the same lady who protested against Naren.

The lady tells about Sonakshi hiring her for the drama. Rohit gets angered on Sonakshi for this madness. He wants to explain Sonakshi that his family isn’t made to deal such drama. He goes home to confront Sonakshi. She lies at first. She admits that she spoke to Naren about the property matter. Sonakshi gets confronted for the protest drama. She admits that she had planned it to make Veena break her silence.

She tells that Veena took a stand for Naren and showed her decision, Veena won’t divorce Naren. She tells that her intentions were good. Rohit can’t believe this. He asks her to spare his family. Nishi shows her true colours to Naren.

She tells Naren that she wants all the property since she has raised his illegitimate daughter for years. Naren can’t believe that Nishi is so bitter hearted. He tells that he will change his will and give equal share to all family members. Nishi tells that she wants the property solely. He wants to inform Rohit about her truth. She stops him and reveals that she married Yash to get a puppet, so that she can always stay in Sippy mansion. She tells him that she will kill him and get the sole rights to decide on the property.

She asks him to die for the betterment of everyone. She tells that Veena and Pooja will surely forgive him if he dies. Naren is shocked. She doesn’t give him time to react and pushes him down the balcony. Naren falls down and gets much injured. Rohit and Sonakshi are super shocked to see this. Nishi runs away and feels Naren deserved this.

Nishi thinks to frame Sonakshi into Naren’s provoked suicide. Naren is taken to the hospital. Veena calls the police to get Sonakshi arrested. Nishi blames Sonakshi and brainwashes Veena. Veena asks inspector to arrest Sonakshi. Rohit defends his wife knowing Sonakshi can never hurt Naren’s heart. Veena doesn’t listen to Rohit. She slaps Sonakshi and commands her to get out of her sight. Poor Sonakshi sobs again while getting arrested. Rohit fails to help Sonakshi. Suman witnesses the huge drama. What will Suman Rastogi do to help her daughter? Keep reading.

Best Comment by Sony:
It’s really very illogical and unrealistic. Please get back to the sweet n happy family track, with romantic Rohit and Sonakshi.