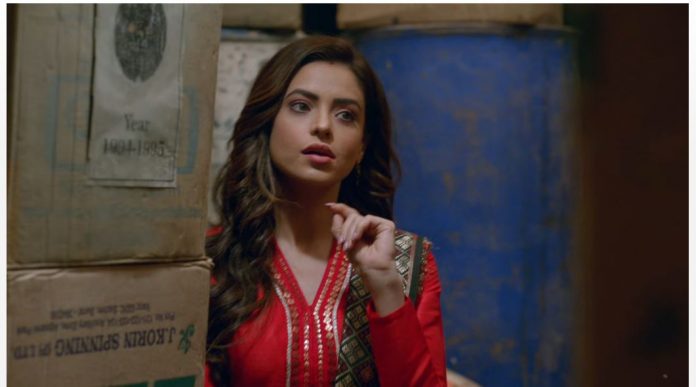 Kasautii thrilling edgy twist Komolika takes extreme step Prerna breaks the goon’s leg in order to save herself. She hides from Jagga as well. Jagga finds the goon injured. He asks for Prerna. The psycho goon tells him that Prerna has broke his leg and ran away. Jagga asks his aides to find Prerna soon, before she escapes. Prerna stays inside the cottage while the goons run out to find her. Jagga hears some sound and looks for Prerna. He finds Prerna hiding. Prerna struggles and manages to escape. Jagga knows that Prerna can’t run away far in pregnant state. He tells that Prerna can’t get saved, she will be killed.

He wants to kill her since his boss Komolika wants Prerna dead. Anurag and Viraj desperately look for Prerna. They find some movement in the jungle area. They see the villagers shouting. They follow the villagers to see what’s happening. They get mislead by them. Anurag calls out Prerna. Prerna hears him and thinks she is imagining his voice. She continues to escape. The villagers tell Anurag that they have come to catch a cheetah who is troubling them a lot. Viraj tells that they lost their way.

They don’t tell that they are finding a pregnant lady. Anurag and Viraj don’t find anyone there and leave from the jungle. Prerna is stuck in the jungle. Jagga follows her. He traces her and thinks she is an easy catch. A snake comes in his way. Prerna gets help from the snake. She runs away to the nearby village. Jagga loses her. He goes back to the cottage. Anurag drops Viraj home. He tells that he is also going home. Viraj thinks Anurag is tired and went home. He wants to find Prerna. He goes to search for her. Anurag is also finding her, since he promised Veena that he won’t come home without Prerna.

Veena prays for her daughter’s safety. Mohini yells at Veena, which angers Moloy. He asks Mohini to pretend good if she can’t be good herself. He threatens to tell the truth to Anurag that Prerna is his wife. He wants Mohini to mend her ways. He feels Mohini can change only this way if he threatens her. He asks her to keep some respect in the family by showing humanity. She hates Prerna. She doesn’t like Moloy taking Prerna and Veena’s side and fighting with her. He tells her that she is proving to be worse day by day. Mohini gets hurt by his words. Moloy tells her that he doesn’t care for her anymore, he can’t stoop to her level.

She asks him not to tell truth to Anurag, which may hurt him. She asks how can he risk Anurag’s life, knowing the truth will stir his memory. He asks her to better think of Prerna. She hates Prerna even more because of her relations falling weak. Komolika meets Jagga and asks the proof for Prerna’s death. Jagga tells her that he lost Prerna. He tells that she has run away and the goons couldn’t find her. She asks them to find Prerna any way. Prerna reaches the village and gets help from a kind couple. The lady is a local doctor and treats Prerna well.

The lady gets help from Prerna’s safety. Prerna feels glad. She wants to contact Anurag. Komolika’s goons find Prerna and take her to the cliff to kill her. Komolika takes the extreme step to kill Prerna and her unborn child. Anurag reaches Prerna and finds her in grave danger. Will Prerna be able to get saved? Keep reading.

After 8 pm the serial world on Indian TV decides we’ve had too much crisis in the real world so it’s time to take us down the spiral of insanity. Each serial competes with the other on this.